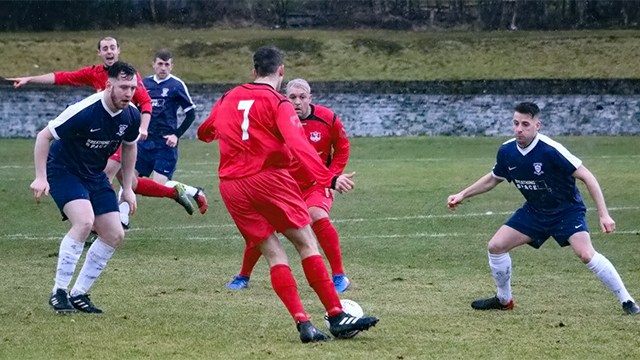 At every level of football there exists a spectrum of referee incompetence and such was on display at Vale of Leven’s Millburn Park on Saturday which can only be described as ‘off the spectrum’.

Rovers introduced some of their latest signings to their starting eleven with Cathay Tracey at right back, Drew Lindsay at sweeper and Graeme Martin on the left wing and it was Rovers who pressed the opening 15 minutes of play with Martins pace causing Vale’s defense no end of problems.

However it was Vale who opened the scoring against the run of play on 17 minutes when a lofted ball was chipped from the centre circle over the Rovers defensive line who momentarily paused clearly expecting to hear Ref’s whistle as the ball fell at the feet of the Vale striker who had clearly strayed several yards offside.

To the absolute astonishment of everyone in the ground, even the home fans, the whistler didn’t blow allowing the striker to race in on goal from 30 yards and fire a well placed shot past the advancing keeper from 12 yards.

The home fans in the stand even laughed at the Ineptitude of the Ref admitting the striker was 5 yards offside.

Rovers hardened their resolve at the gross injustice and continued to press forward down the flanks with crosses only finding the heads of Vale defenders or shots being blocked on the edge of the box.

On 40 minutes Vale should have been reduced to 10 men when their right back as ‘last man’ clearly pulled back Graeme Martin on the left edge of the box denying a goal scoring opportunity.

The Vale full back had previously been booked for a foul on Martin and looked certain to receive his marching orders, however the Ref didn’t even speak to the Vale full back or show him a 2nd yellow card.

Weir then blasted the ball over the bar from resultant free kick.

On 42 minutes Rovers deservedly drew level when Weir found Kane on the right wing with a 20 yard pass which he sprinted onto in his stride and immediately passed to Cassidy who turned and made a slick pass to Sean McKenna who blasted the ball into the net from 5 yards.

The second half started the same way as the first with Rovers forcing corners which were poorly taken and easily defended.

On 57 minutes Rovers were reduced to 10 men when Weir was adjudged to have acted with intent as he motioned with his head towards a Vale player as they ‘squared up’ after the Rovers player was dispossessed and wrestled to the ground inside the Vale box as he ran in on goal from a short corner.

Two minutes later Rovers were reduced to nine men when Kane picked up a nonsensical second yellow for tugging on the sleeve of an opponent.

Rovers defended resolutely until the 88th minute when a speculative shot from the right edge of the box squirmed through a ruck of players legs and was tipped onto the post by Rovers Keeper.

The rebound fell at the feel of Vale striker who simply side footed the ball into the net from 2yards.

To add insult to injury in the 95th minute Vale were awarded a laughable penalty when Rovers keeper smothered a loose ball at the feet of Vales centre forward who stepped into the keepers body with planted feet and bent knees.

In the week where Oscars were given out one award should have gone to the Vale striker for Best Dive In Injury Time. Another recipient should have been the Ref for The Worst Refereeing Performance This Century.

The penalty was stroked home high into the left corner of the net seconds before the final whistle blew.