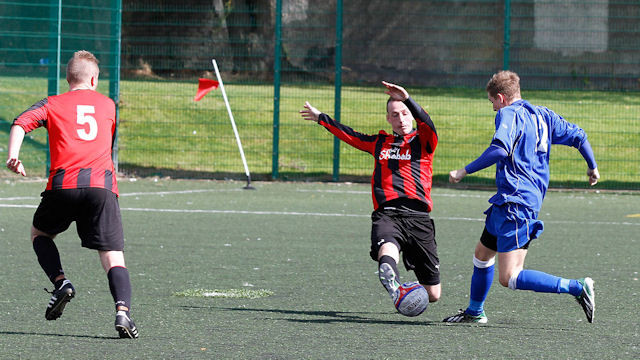 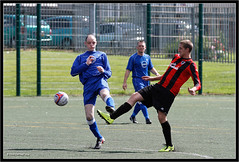 Carluke played this match at a very unsatisfactory Wishaw sports centre venue but put in a good performance nonetheless.

The game saw Rovers on the front foot from the start with Jordan Lithgow linking with Johnny Wilson on the right before Wilson’s cross found Ian Watt but the strikers shot was saved by the home keeper.

Rovers were not to be denied for long though and took the lead in the 8th min when good work from Ryan Smillie won them a corner, this was put in by Gordon Murphy for Stevie Murray to head home Carlukes first competitive goal of the season and give them a 1-0 lead.

Rovers had a fright from the home side in the 10th min when a free kick was only parried by keeper Stuart Thomson, but he reacted quickly enough to save at the expense of a corner as Newmains looked to score from the loose ball.

The visitors doubled their lead a couple of minutes later though when a great ball from Lithgow on the right found Watt and as the home defence waited for off side the striker chipped the home keeper with an excellent finish from just inside the box for 2-0.

As the fast paced half wore on Newmains were unlucky not to score when slack play gave the ball away in the Rovers midfield but Lithgow was on hand to cut out their cross at the expense of a corner, then with Rovers looking for an off side decision that did not come they broke through but the final shot came back off the post before being cleared.

Carluke had the best of what, was left of the half but could not take chances made for Murphy and Gary Gow who hit the bar with a great strike after good link up on the left.

as the half drew to a close Carluke won a corner and Watt put it in to the danger area and Smillie looked to get the final touch as it went in to the Newmains net to give Rovers a 3-0 lead at half time. 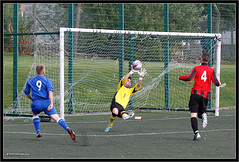 Carluke continued where they left off as they started the second half and won a corner in the 51st min and Watt put the ball in for Murray to win again with a net bound header that was handled on the line to give Rovers a penalty and see Newmains reduced to 10 men, Murphy stepped up to take the kick and hammered the ball down the middle for 4-0 to Carluke.

The now rampant Rovers stretched the lead further in the 64th min with the best goal of the match when Smillie put the ball out to Daniel Kindlan on the right, his cut back found Stephen Ferguson who laid the ball in to the path of Smillie who danced round three defenders before putting in a great low finish for 5-0.

The match was only restarted a couple of minutes when Smillie hit his 3rd goal of the match when Daniel Kindlan again cut the ball back for him to finish well for 6-0.

Smillie could have made it even better for the Rovers in 69 mins but his parting shot was well saved, then he set up Watt but his shot was also saved well.

The final goal of the match came in the 82nd min when good work from Ferguson won the ball on the left, he then fed Wilson who in turn set Watt free and he cut in from the left before hitting a great sho0t beating the home keeper for 7-0.

Rovers continued to attack but shots from Dean Kindlan and Smillie failed to find their target and the final score was 7-0 to the visitors from Carluke.