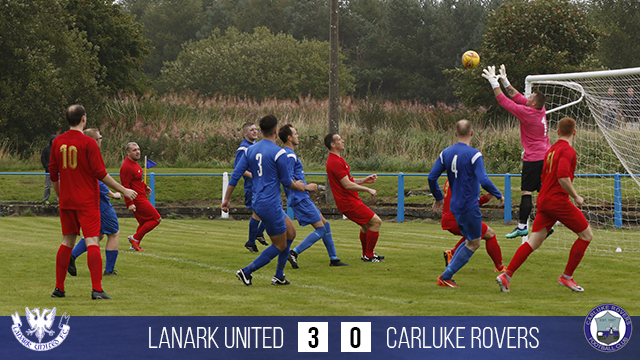 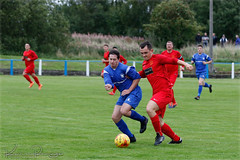 Carluke travelled to local rivals Lanark looking to bounce back after last weekends defeat at home to St Anthonys.

Lanark had the bulk of the early pressure with several attempts at goal coming close.

20 mins in Lanarks pressure was rewarded when a corner flighted into the box was not dealt with by the Rovers defence and the resultant goalmouth scramble ended with the ball being prodded into the net by Lanark Cammy Lawson.

Carluke seemed to play better after they went behind, Mark Cassidy coming closest when a shot from the left beat the Lanark keeper but ended up wide of the post. 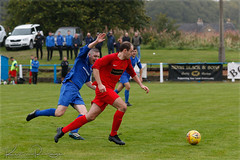 Further chances came for both sides and thanks to Grant in the Carluke goal pulling off a couple of good saves the scoreline remained 1-0 at half time.

Carluke came out in the second half and pressed Lanark from the whistle and for much of the half certainly looked the most likely to score.

Cassidy again had an excellent chance as he got through on the keeper but lifted his shot over the bar.

The match changed for the worse for Carluke as McAllister was shown a second yellow card for a dubious foul at the edge of the Rovers box. 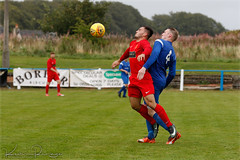 Weirs complaints to the referee resulted in another red and Rovers were down to 9 men.

Rovers day got worse as following a Lanark free kick and poor clearance from Grant, seen Lindsay handle on the line to prevent another Lanark goal, the referee had no option but show Lindsay a red card.

With Rovers now down to 8 men, former Rovers stricker Watt stepped up and slotted home the resultant penalty to put the match beyond Rovers and 3 points to the Moor park side.

With minutes remaining and the Rovers backs to the wall Lanark finished off with a third with an unstoppable shot into the top left corner of the goal.

Its a home game next week to Ardeer Thistle where hopefully the Rovers can put this game behind them and get back to winning ways.