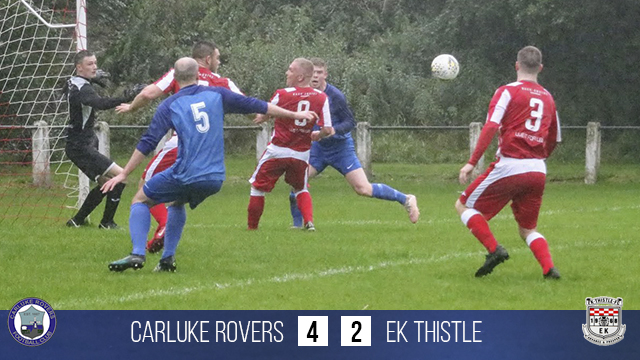 Carluke went into the match with quite a few injuries but still on a high after the good start they had made to the season. East Kilbride on the other hand, with a difficult first couple of games had yet to register their first win.

The game kicked off in pouring rain on a sodden pitch with long grass which was to play it’s part in the quality of the play particularly in the first half. It was East Kilbride who started slightly the brighter without actually creating anything until the 11th minute when Kevin Cloherty shot harmlessly past the right hand post from 20 yards.

This was quickly followed by Carluke’s first opportunity when Stuart Mitchell was pulled down outside the box on the right side and the resultant free kick was met at the backpost by Paul Donaghy who headed attempt was slightly behind him forcing the ball across the six yard box with the danger averted.

In the 15th minute Donaghy found himself in the box chasing down a pass resulting in a clash with the East Kilbride keeper at the edge of the box with the Ref pointing to the spot to award what looked like a soft penalty. This was duly dispatched by Mark Weir to open the scoring. 1-0 Carluke.

There had not been a great deal of action in either goalmouth but in the 20th minute Ryan McPhilips of EK fired in a great shot from 16 yards which was well saved by Dan Terry in the Carluke goal down to his left.

This was a warning for Carluke which they did not heed as only a minute later the same player found himself in acres of space just inside the Carluke box and this time he made no mistake despite the efforts of Keeper Terry who managed to get a hand to the ball but couldn’t prevent it from going into the bottom corner. 1-1

With regard to open play East Kilbride were just edging it as due to the conditions a lot of Carluke’s passing was going astray. However slightly against the run of play Carluke were to regain the lead in the 27th minute. A great free kick was fired in by Mark Weir from outside the box on the right hand side and Carluke top scorer Ciaran Lafferty reacted quicker than anyone else to glance the ball into the net with his head from 6 yards out. 2-1 Carluke.

Even with the lead Carluke never looked comfortable in the first half and it was that man Ryan McPhilips who got on the end of a free kick in too much space and calmly knocked in the equaliser. This was both his and East Kilbride’s second goal. 2-2.

This turned out to be the last major action of the first half and the last 15 minutes were played out with no team in the ascendancy.

The second half started with Carluke substituting their Keeper with Adam Brown coming on for Dan Terry. However it was an earlier substitution in the first that was to prove more significant in the outcome of this match when Jamie Dickson, still returning to full fitness, came on to replace the injured striker Ciaran Lafferty. In the 48th minute Dickson pulled down a cross from Stuart Mitchell on the left and controlled the ball before curling a lovely left foot shot into the corner of the net to make the score 3-2 to Carluke.

This goal was critical as it seemed to galvanise the Carluke team into action and they started playing with more authority, conviction and confidence. Firstly it was Stuart Mitchell down the left who eluded his defender and whipped in a great cross that was met by Donaghy only to see his side footed effort skew past the left hand post from a few yards out. Only a minute later a similar cross from the left by Jamie Dickson was fired over the bar by Donaghy again when it was easier to score.

There were other chances missed by Carluke particularly in the 80th minute when a corner from the right was headed onto the bar by Shaun Watson and the rebound hit over the bar by James McAllister.

Although it was all Carluke for the bulk of the second half there was a feeling among the home support that these missed chances might be rued. However these thoughts were dispelled when in the 84th minute a well timed run by Donaghy latching onto a great through ball by Jamie Dickson caught out the East Kilbride defence and he calmly rounded the stranded keeper and rolled the ball into the empty net to finish the game as a contest. He had been a thorn in the Thistle defence all night with his strong running and link up play and this goal was no more than his efforts deserved. 4-2 Carluke.

This was to be the last action of the game and Carluke comfortably held on to record their fourth win in five league games. With other results going Carluke’s way they now sit proudly at the top of the Division, two points clear with the best goal difference in the league.