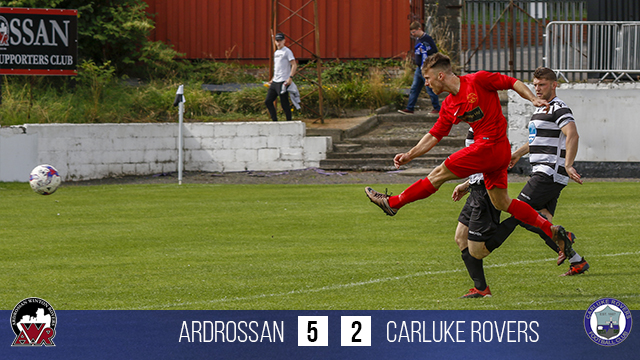 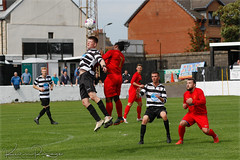 Carluke Rovers travelled to Ardrossan today sitting proudly at the top of the West Division One Championship to take on Ardrossan Winton Rovers who on the other hand have had a relatively poor start and were looking to get back on the winning trail following their defeat by Girvan in midweek. Carluke also had their squad decimated with injuries and call offs to key players. This meant that both the Manager and his Assistant were named on the substitutes bench.

The game kicked off in perfect weather with the sun beating down on an excellent playing surface. Carluke started by far the brighter and had three excellent chances in the first 5 minutes. In the first minute a through ball from Shaun McKenna found Ciaran Lafferty and his shot was just past the keeper’s right hand post. This was followed in the 4th minute when Ross MacNeill ran down the right wing, passed the ball into Paul Donaghy who managed to elude his marker before shooting wide of the left hand post. Next it was Lafferty again who cut inside but his shot was weak and directly at the Ardrossan keeper, Chris Lamb.

Carluke were to pay dearly for these early misses as Winton Rovers were starting to get the bit between their teeth and were looking to claim the scalp of the league leaders. In fact it was their first foray into attack in the 12th minute which was to result in the first goal of the game. As the Rovers defence were coming out Jamie Henderson beat the offside trap and collected the ball to run in on goal and give Carluke Keeper, Adam Brown no chance with a low shot making the score 1-0.

Carluke didn’t have time to catch their breath when the same player was adjudged to be pulled down a minute later as he barged into the box with the Referee pointing to the spot for a penalty that looked rather soft. This was duly dispatched by Henderson as he put the Keeper the wrong way. 2-0 Ardrossan 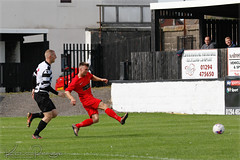 This quick fire double seemed to take the wind out of Rovers sails and the rest of the half was to be an error strewn affair with Ardrossan Winton Rovers in the ascendancy. Thei next effort in the 25th minute was a good turn and shot by Derek Kennedy but it was held by Carluke keeper Brown. However 2 minutes later the Ardrossan pressure was to pay off when a cross from the right from Rory Campbell was met by the head of Kyle Lochhead whose header from 6 yards out left Brown with no chance to make the score 3-0.

There was no let up in the Ardrossan attacks and Rovers were struggling without the leadership in midfield of captain Mark Weir who was out with an injury. On top of this the Carluke midfield seemed to be at sixes and sevens not sure who was marking who and not getting up to support the frontline on the odd occasion when Carluke had the ball deep in the Ardrossan half.

It was therefore no surprise when in the 35th minute Ardrossan were to breach the Carluke rearguard again when full back Andrew Hunter crossed into Ryan McKie who evaded a couple of tackles before dispatching the ball past the despairing reach of Brown to make the score 4-0 to Ardrossan. Fortunately for Carluke there was no more scoring in the first half and they had the opportunity to regroup at halftime.

Due to the lack of players available there was not much the Carluke Rovers management team could do to change things as the bench was limited other than bring on Jamie Dickson who could add a bit of creativity and guile to the midfield which had been lacking in the first half for the injured Shaun McKenna.

In fact it was Dickson who was to have an immediate impact as in the first minute after the restart a clever reverse pass released Ciaran Lafferty whose shot found its way past Lamb in the Ardrossan goal to give Carluke a brief glimmer of light at 4-1.

This goal seemed to give Carluke a little more belief and 2 minutes later it was Dickson again coming in at the backpost for a free header which he unfortunately managed to put over the bar from close range. Carluke were now at least matching Ardrossan and another chance was to come their way in the 55th minute when Ross McNeill was found on the right wing and he ran into the box but instead of shooting he tried to find Laffery with a pass to the backpost but the ball was just too far in front of the striker and it rolled harmlessly past the left hand post. 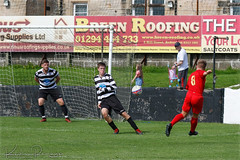 The game was now moving from end to end and Ardrossan were still on the search for a fifth goal which would effectively end the contest. They were awarded a freekick 25 yards from goal and it was taken by their centre half, Michael Lennox who curled a great shot that was heading for the postage stamp when Adam Brown in the Carluke goal managed to throw himself across his goal and touch the ball onto the bar saving what would have been a certain counter.

Almost immediately Carluke went up the other end and a shot by Ciaran Lafferty hit the Ardrossan post rebounding to Ross McNeill who took a touch and calmly blasted the ball into the roof of the net to make the score 4-2. The Carluke team were starting to believe there was an unlikely route back into this game but Ardrossan remained calm and continued to search for that fifth goal and it only took a great save by Brown in the Carluke goal to deny Derek Kennedy’s piledriver as he cut in from the right.

Both teams were searching for that elusive next goal and it was to be Ardrossan who were to put an end to Carluke’s plucky fight back in the 70th minute when a corner on the left was met perfectly by the head of Kyle Lochhead finding the roof of the Carluke net and effectively ending the game as a contest.

This was to be the last major piece of action in the game and Ardrossan ran out deserved winners. Carluke on the other hand can take solace from their good start to the season and are still well in the mix at the top end of the league.