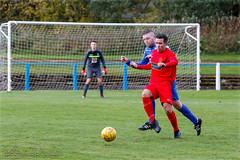 Although this was effectively a mid table clash between these long time rivals, the Rovers knew that a victory would more than likely propel them into a promotion slot. However it would be the hosts who would secure the points when they exploited the defensive frailties of their visitors.

There were only 9 minutes on the clock when the Rovers defence was breached. A poor clearance resulted in the ball being returned quickly into the Carluke box, where Lanark’s Kerr easily pushed the ball into the net from inside the 6 yard box.

Four minutes later Larkin looked as though he could level the scores when a through ball provided him with a clear shot from outside the Lanark box. His attempt however was easily collected by the Lanark stopper.

Less than a minute later Lanark were gifted a second goal when the Rovers sweeper McKenna failed to deal with a long ball into the right side of the Carluke box. When the incoming Lanark trialist wearing the number 9 shirt clashed with him and went to ground, McAlistair in the Carluke goal approached to recover the loose ball only for the Lanark striker to swing a leg to push the ball past him. The ball trundled across the empty Carluke goal and looked as though it would miss but it struck the inside of the post and Lanark were 2 up. 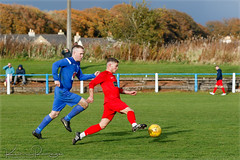 Despite not putting the Lanark defence under any significant pressure, Carluke managed to score in the 36 minute when Larkin easily chipped the oncoming keeper from outside the box to halve the Lanark’s lead.

However less than a minute later, and clearly before the visitors had settled, the Carluke defence was breached again. Another long ball into the Carluke box found the number 9 trialist, whose first time shot restored the home team’s 2 goal lead.

Whatever manager Wilson said in the Carluke dressing room at half time it had the desired effect. Within 2 minutes of the kick off Carluke had cut the Lanark lead to one goal. Half time substitute Louden picked up the ball just inside the Lanark half. His pace left Haddow in the Lanark defence scrambling to keep up with him. When he reached the goal line he drilled a ball into the box which Larkin sweetly passed in to the Lanark goal. 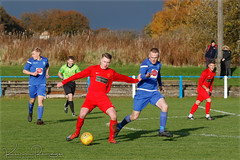 Carluke continued to look like a team desperate to make amends for their poor performance in the first half. On 51 minutes, Van Nuill was found with a through ball, however despite making space for himself by coming inside, his shot sailed over the bar.

On 59 minutes the equaliser was almost delivered when Greirson found Louden in the box. His goal bound shot was only stopped when a finger tip save by the Lanark keeper tipped the ball over the bar.

Carluke did get the ball in the net on the 66th minute. Donaghy scored when the ball broke to him after a scramble in the box. However the referee ruled it out for offside, despite the presence of a Lanark defender on the goal line.

Despite continuous pressure on the Lanark goal throughout the second half the visitors could not find a much deserved equaliser.

Carluke travel to Port Glasgow next week for another mid table fixture. Hoping that they can secure the points that they failed to pick up at Moor Park today.