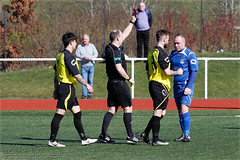 Last week’s emphatic league win over St Anthonys should have been the inspiration to secure a win over Bellshill, instead it was their recent heroic win over Irvine Victoria which would inspire the Rovers squad to another “against the odds” cup tie victory.

Top goal scorer Watt pressed hard on the left to open the scoring in a half devoid of clear cut chances.

On 22 minutes, a reckless challenge by Gow earned him a second yellow and an early shower.

Although this allowed Bellshill to pile the pressure on the Rovers defensive line it coped well.

The middle of the park battle was being won by Carluke, with Haddow and McCole dominating and Vezza’s pace proving to be too much for the visitors. 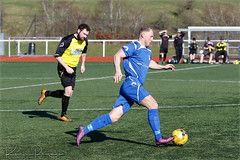 However the pressure eventually paid off and with only a couple of minutes left in the half Robertson scored to give Bellshill the lead at the interval.

In the second half Bellshill once again piled the pressure on the Rovers defence but with little real impact.

Watt and Fernie were having more success and the well organised visitors defence was beginning to struggle. 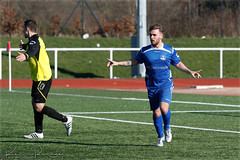 In the 75th minute the Bellshill defence finally relented.

A surging run from Watt on the right ended with a foul on the striker and calls for a penalty, but the referee awarded the kick just outside the Bellshill box. When Weir’s effort rebounded back to him he lobbed it back into the melee and Greg Fernie was quickest to the ball and guided it past the Bellshill keeper.

Carluke continued to press and were rewarded 3 mins later. A cross from Mitchell on the right found Fernie on his own in the Bellshill box and he easily headed it past the keeper.

The visitors pressed for the last 10 mins to look for the equaliser which would have taken the tie to penalties.

It was not to be and another cup tie victory was recorded by the Rovers in a season which will remembered for memorable cup games.