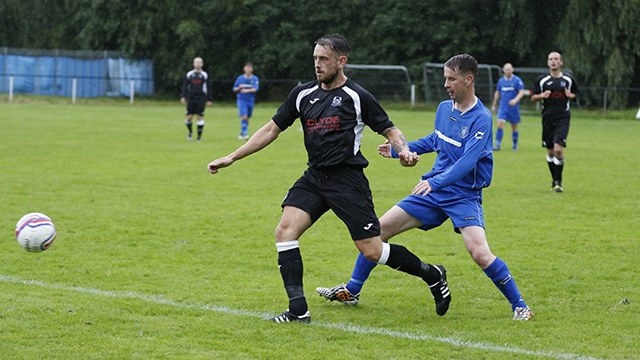 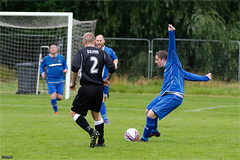 This match saw Rovers produce a fairly good first half performance but a disastrous second period saw them end up with a drubbing at the hands of neighbours Wishaw.

The hosts had a couple of early chances before Carluke got in to gear with Mark Weir’s excellent ball finding Ian Watt in space but the strikers shot was well saved.

The scoring was opened in the 13th min when Rovers had a few chances to clear the ball but none was taken and Wishaw were allowed an opener from wide on the left for 1-0.

Carluke worked themselves back in to the match and got on level terms in 21 mins when a good move on the right allowed Dale Gordon to cross to the back post where Watt out jumped his marker for a header to make it 1-1. 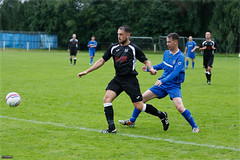 Level terms did not last for long though as Rovers again lost possession allowing Wishaw to break on the right and a finish from a tight angle made it 2-1.

Carluke fashioned a couple of chances for Watt aas the half drew to a close but neither could be taken and half time gave a score of Wishaw 2 v 1 Carluke Rovers.

The second half was barely a minute old when a poor pass from Gordon allowed Wishaw to switch the play across field and score from the right for 3-1.

Rovers were finding chances few and far between but did get one in 56 mins when good work from Mark Hadddow allowed Watt to set up Jamie Dickson but his shot flashed across goal and wide. 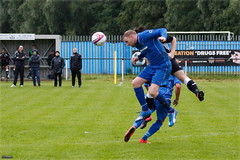 Carluke lost further goals in 58 and 75 mins to give the home side a 5-1 lead before they got another rare chance when Stuart Mitchell put Greg Fernie through on goal but his shot was well saved.

The rout was completed by Wishaw with another good goal for a final score of 6-1.
Rovers team.