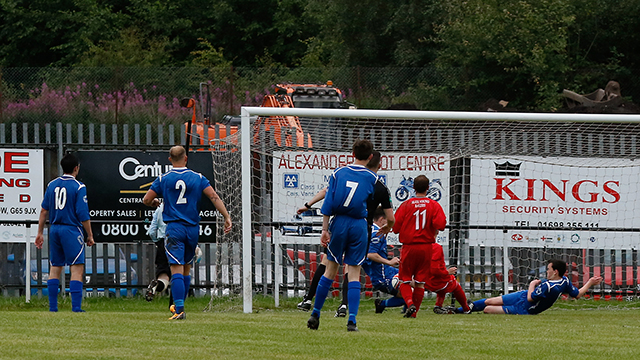 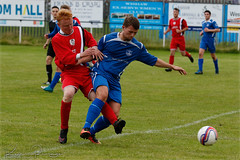 With a much changed side due to Holidays, suspensions and work commitments Rovers took on local rivals Wishaw in this their first competitive match of the season.

Wishaw seemed to settle quicker than Carluke who were relying on hitting on the break to try to get on the score sheet.

The first decent chance of the match came when the excellent James Martin of Carluke put in a great driving run leaving opponents in his wake but his final shot was well saved by the home keeper in 15 mins then a good ball over the Wishaw defence found Ian Watt but his shot was just over the bar.

Carluke were by now setting the pace in the match and a great cross field ball from Martin found Scott Blacklaw on the right but after beating his marker the final cut back was cut out by the home defence.

Wishaw should have taken the lead in the 25th min when good work on the right ended with a fine cross but Coffey headed over the bar from close range. 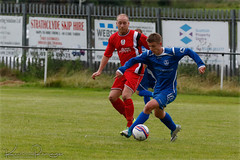 With half time approaching Carluke created another chance when Mark Haddow got on the end of a cross but his header was blocked then Martin played the ball to Scott Tart but his weak shot was wide of target.

The second half started with the home side pressing but Davy Gray in the Rovers defence was equal to anything thrown at him, from one of his clearances the ball broke for Watt who charged towards the Wishaw goal but his final ball was again cut out.

The chance of the match fell to ex Rovers man Ryan Smillie in 49 mins when Carluke lost possession on the edge of their penalty area with Smillie collecting and beating two defenders and keeper David Thomson, but just as he looked to put the ball in to the net a fantastic last ditch challenge from youngster Chris Lambie cleared the ball for a corner and kept the scores level.

Carluke went on to create more chances as the half went on, the first of these came from another excellent run from Martin ended with a cross in to the box that was headed just over by Greg Kane, then Martin again broke but his final shot was again saved. 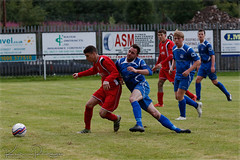 Watt had another chance mid way through the half when he broke on the right but again his low shot was well saved.

In 77 mins Carluke saw a good ball from Chick McCole set up Haddow he then linked with Watt before collecting the ball again but his final shot was just over the bar, this proved to be Haddows last involvement in the match as he picked up a second caution a minute later and was ordered off.

The home side had a bit more pressure with the extra man but could not make it pay and the final chance of thee match fell to the visitors from Carluke when Kane picked up a loose ball on the edge of the penalty area but his shot was wide of target.