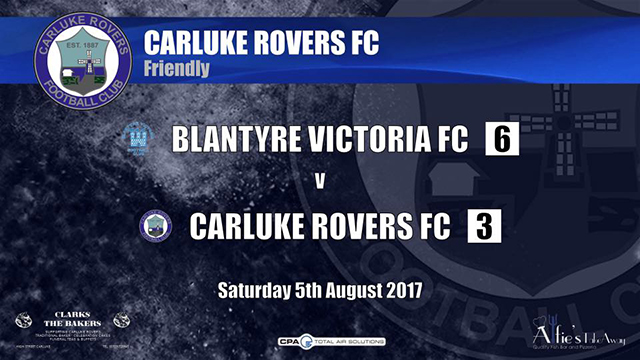 Carluke started brightly in this friendly as they had no league cup match but losing cheap goals continues to be a problem.

The first minute saw Chick McCole put a good ball in for Mark Cassidy who saw his shot well saved, then a blistering run from James Martin ended with another shot but again the home keeper kept the scores level.

The best early chance for Vics came when Rovers keeper Reece Murray gave away a penalty but this was blasted off the post before going clear in 10 mins.

The home side did open the scoring a few minutes later though when Carluke failed to clear a corner and the ball was taken to the by line before being cut back and unfortunately turned in to his own net by Colin Marshall for 1-0.

The visitors got back on level terms quickly though when aa pass from McCole was played on to Martin by Cassidy and another turn of pace from Martin saw him lose his marker before he fired an unstoppable shot high in to the Vics net for 1-1.

Rovers lost a second goal in the 34th min though again from a corner, as a header was played in Murray looked to have done enough to keep it out but the ball was bundled home for 2-1, this was followed by another goal in the 42nd minute to make it 3-1 to the home side after Carluke gifted them possession.

With half time approaching McCole scored a quite incredible goal from the touch line when he whipped a high ball in that dropped over the scrambling home keeper for a 3-2 half time score.

The second half was only minutes old when Carluke drew level, Ian Watt took the ball wide on the right then put in a hopeful cross that was fumbled in to the net by the home keeper for 3-3.

Rovers had a chance to go in front in the 55th min with a good move involving Martin and Cassidy but that chance was not taken and they proceeded to lose three quick goals between the 60th and 75th mins to give a comfortable victory to the home side.