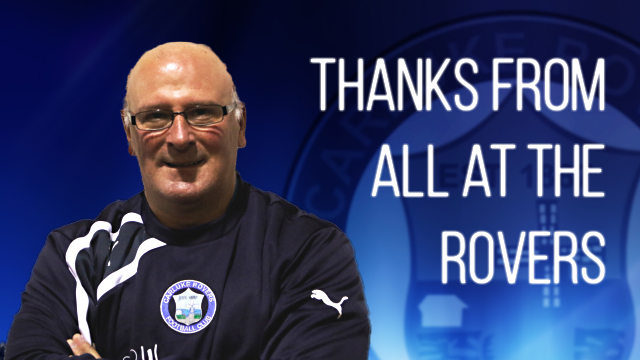 Ian McKnight’s tenure as the Rovers Chairman came to an end at this weeks AGM.

On behalf of the Players, Management and Committee at the Rovers we would like to take this opportunity to thank Ian for his splendid chairmanship over the course of the last 3 1/2 years.

Without doubt when Ian came on board he steadied the ship and continually pushed us forward, ultimately to this year’s promotion.

His tireless work ethic meant he was often called into action as the club physio, match reporter and even washing the strips.

He was always first into the dressing room on match days, making sure the playing kit was put out. On training nights he was first there to get the equipment, balls and water bottles ready.

He even made sure there was a supply of biscuits for the post training cuppa for the players.

His energy was matched by his generosity as he was always willing to pay for new kit, tracksuits this year, or to pay a transfer fee for a much needed player.

He gifted most of the auction items for the Rovers annual Sportsman’s Dinner, which always brought hundreds of much needed pounds into the club coffers.

Thanks Ian for all that you’ve done for the club and we wish you every success for your next venture.