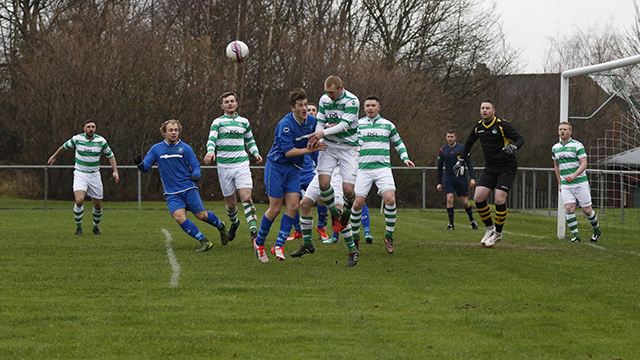 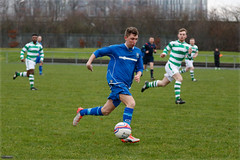 A repeat of the score line of the season opener did neither side any favours in this return match in Govan on Saturday.

Carluke had the best of the early part of the match and took the lead in the 3rd min when Mark Haddow looked to have been brought down in the box but a free kick was all that was on offer for Carluke, Mark Weir stepped up though and confidently placed the ball low to the keepers right for 1-0 to the visitors.

The next chance came for Rovers came in 10 mins when Ryan Smillie cut in from the left but his parting right foot effort went high and wide of the target.

The home side pressed Carluke back for a few mins from this point but did not put any direct threat on Jonny Griers goal before Carluke went on the attack again with Smillie linking up with Chick McCole before releasing Lewis McDougall on the right but the youngsters low cross was cut out by the Ants defence.

The visitors doubled their lead in 24 mins when Jamie Dickson won a challenge on the right before setting Haddow clear, his perfect ball in to the path of Smillie who coolly rounded the home keeper before slotting home from a tight angle for 2-0 to Carluke.

With half time approaching Rovers broke through the middle with Jonny Wilson setting Smillie free again but his effort went across goal and harmlessly wide. 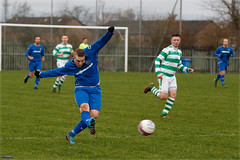 Carluke were made to pay for this miss when careless possession in the middle of the park allowed The Ants to play a long ball in to the Rovers penalty area where a hopeful overhead effort from Brown looked to be going wide but Duncan got a fortunate touch at the back post to steer the ball past Grier for for 2-1 a score that stood until half time.

The second half saw Carluke struggle to put much football together and chances were few and far between with the home side having the bulk of the play.
In a rare break Carluke won a corner with the ball being cleared back out to Weir on the right but his effort posed no threat to the home keeper as it went well over the bar.

The Ants pressed Rovers back for spells before they put together a good move from Haddow, Dickson and McDougall who combined to set up Smillie on the left but his parting shot was well saved by Duncan in the Ants goal.

The home side drew level in the 67th min when they broke down the right and a low ball eventually found its way to Duncan who again fired home for 2-2.

This goal did spur Rovers on and they created a few good chances quickly after this the first a couple of minutes later when Weir played the ball to Smillie on the left but after cutting inside again, his final shot went just over the bar, then a minute later a great driving run from McCole saw him pass three opponents before the ball was forced out for a corner. 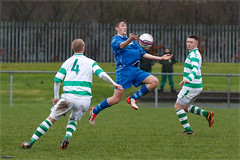 The best chance of the second half for Rovers came when Smillie cut back a great ball to Aidan Ward who controlled well in front of goal then shot what looked to be a net bound effort but an amazing save from Duncan saw him push the ball over the bar.

The Ants produced chances of their own and really should have taken the lead in the 74th min when another cross from the right reached Duncan but somehow his effort went across goal and wide of target. Then a shot from Crawford brought a good save from Grier in the Carluke goal.

Carluke thought they had stolen the match at the end when Smillie cut in from the right and laid the ball in to the path of Ian Watt but the referee somehow contrived to rule the effort out for off side, a decision that bewildered the visiting side.