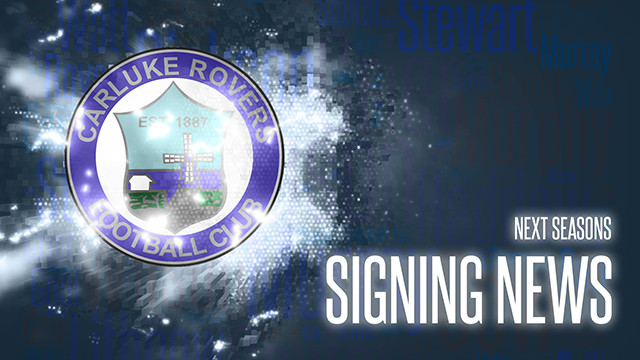 Carluke Rovers Management and Committee are pleased to pass on the news that last seasons top goal scorer and Players Player of the Year Ian Watt has re-signed to the the Rovers for next season.

We are especially delighted as Ian was on the radar of several Superleague clubs and much speculation was being made of his destination for next season, so it its a great bit of business for the club to hold onto his services.

Colin Slater and Andy Barr are delighted to retain the nucleus of last seasons squad, all of whom played a vital part in a fine run in the second half of the season which seen us on an 14 match unbeaten run and a 5th place finish in the league.

The club are also in talks with a few other members of last seasons squad as well as being in discussion with regard to adding some fresh faces to the squad.

The club would also like to thank 2 people, Stephen Ferguson who is retiring and Richard McCrorie who is moving on to other ventures. The club would like to thank them both for their great service and commitment to the Rovers though the years and look forward to seeing them both at some future games where they will be most welcome.