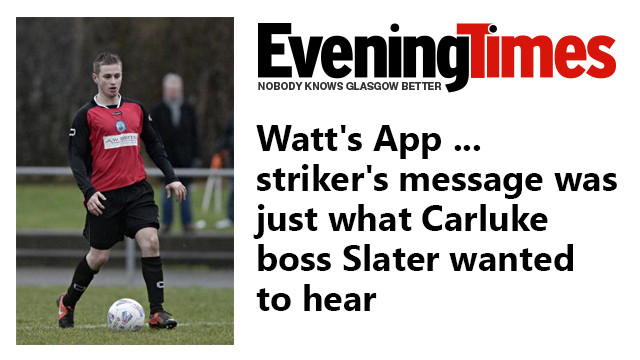 CARLUKE ROVERS boss Colin Slater reckons he has already clinched the signing of the summer in holding on to striker Ian Watt.

The former Queen’s Park frontman’s netting of 31 goals last season in a prolific scoring partnership alongside Ryan Smillie (27), did not go unnoticed, and a number of leading Junior clubs are reported to have made signing overtures in the hope of luring away the out-of-contract ace.

And terracing rumours had Petershill clearly winning the race for the 25-year-old’s signature right up until midweek when he appeared for signing talks and wasted no time in penning a new deal with his Lanarkshire club, much to the delight of Slater.

He insisted: “Chucky is very much his own man, and I was more or less resigned to losing him after hearing he had entered into talks with a number of interested clubs.

“Some of the deals pushed under his nose were lucrative, to say the least, but he rejected all advances in favour of staying at Carluke, and that has to be a real feather in our cap as well as a major boost to our team plans for next season.

“He and Ryan paired up so well to give us a real potent attacking edge which became three-pronged towards the end of season when Greg Cavanagh finally returned after injury, and I’m delighted at having three strikers of their quality at my disposal again.

“It’s a shot in the arm for everyone associated with Carluke Rovers, not least of all me, as I can now focus on strengthening other areas of the team rather than scouring the amateur ranks trying to unearth a replacement hitman.”

Slater’s determination to have Rovers mount a promotion challenge has seen him sign 15 players to date, inclusive of teenage talents Johnny Grier and Johnny Lithgow.

He added: “Grier has all the makings of a top keeper, while young Lithgow emerged as a player of real promise over our run-in games and we firmly believe a mix of youth and experience is the formula to take us up.

“For that reason, Stevie Murray has declared a willingness to put his ageing limbs through it all again, and we’re hopeful of persuading big Craig Stark into likewise giving us another season before he contemplates hanging up the boots and moving into a coaching role.

“Both these guys are huge characters and so influential in and around our dressing room that I consider them to be close to irreplaceable.”

Peasy boss Willie Patterson has reportedly wasted no time in getting over any disappointment felt at losing Watt by snapping up Scott Davidson (Clydebank), as well as goalscoring midfielder Darren McLean from Kilbirnie Ladeside, while Blasties forward Chris Craig continues to be similarly linked with a move to Springburn.

Flying winger Andy Cross (Shotts Bon Accord), is thought to be another Peasy close-season recruit as replacement for Ritchie Burke, who is on his way to Beith along with tenacious midfielder Tommy Martin, whose ex-Clydebank engine-room partner Jamie Campbell has clinched a dream move to West Region kingpins Auchinleck Talbot, where he will be joined by lively forward Stevie Wilson (Troon), brother of Talbot hitman Graeme.

Talbot gaffer Tommy Sloan was not as successful in his attempts to land Harmony Row Under-21 midfielder Grant Bolton, who has signed on the dotted line for Ayrshire rivals Irvine Meadow, whose other newcomers include Graeme Girvan (Petershill), ex-Stranraer goalkeeper Daniel Tobin and highly-sought-after Queen’s Park duo Sean Fraser and Ross McPherson.

Medda boss Stevie Rankin was thwarted by Troon in his bid to land Auchinleck midfielder Colin Spence, whose move to Portland Park coincides with the arrival of Beith transfer-listed frontman Sean McKenna, a somewhat fortuitous capture now that renowned goalscorer David Gillies has called time on his playing career.

And Vale of Clyde’s signing of striker Ryan Connelly from Bellshill Athletic could herald the departure of highly-regarded Tin Pail frontman Derek Hepburn, who is on the signing radar of Arthurlie and Pollok