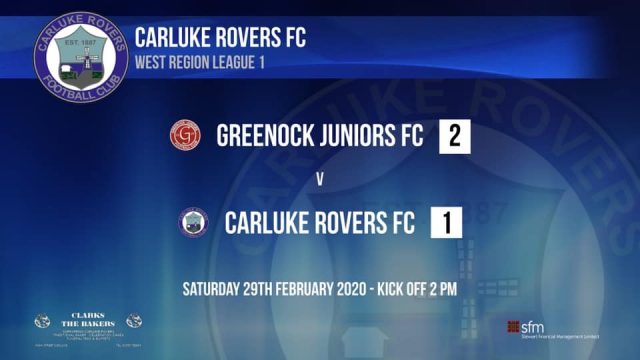 Carluke Rovers visited Greenock Juniors this week hoping to repeat the victory they had earlier in the season moving further towards league safety. As it has been for the last few Saturdays the weather was atrocious with driving sleet and rain accompanied by a strong wind. In fact this was the only game in the Division that survivedthe weather.

The game kicked off on the sodden pitch with Carluke playing into the wind in the first half. However with the wind at their back it was Greenock who appeared to have the greater appetite for the battle. It only took till the 8th minute for Greenock to open the scoring when a cross from Sean Doherty on the left was met by the unmarked Jamie Black who glanced a header into the back of the net to make the score 1-0 to Greenock.

Greenock continued to push forward as Carluke were having difficulty in clearing their lines into the strong wind but a good turn and shot in the 17th minute from James Frame gave some respite although it was straight at the Greenock keeper who held it comfortably.

The game got further away from Carluke when in the 21st minute Greenock took a 2 goal lead. A shot came in from the left and Martin Johnson, making his competitive debut in goal for Carluke, only managed to parry the ball out left to the feet of Jamie Cunningham who controlled it and drilled his shot into the bottom of the netfrom the corner of the six yard box 2-0 to Greenock.

This goal seemed to spur Carluke into a bit of life and they began causing some problems for the Greenock rearguard. A free kick was conceded by Greenock midway in their own half on the right. It was swung in by Dillon Duddy onto the head of Eddie Haley who couldn’t get the ball on target as it sailed over the bar from 10 yards out.

This was followed by a good move down the right where Duddy found Carluke right back Gary Livingstone on the overlap. His great low cross to the back post was met by James Frame but his shot went just wide.

It was the turn of James Frame next to be the provider when he fired in a low cross from the left which was met by the onrushing Eddie Haley. Unfortunately for Carluke though Graham Black in the Greenock goal closed down Haley and the resultant shot hit off his chest from close range and was kicked to
safety. There was to be no further action in the first half and both sets of players trudged off at half time with the score at 2-0.

The second half got underway with no let up in the driving rain and it was Carluke who were to have the wind at their back this time round. That said it was Greenock who were to create the first chance of the half when Alan Frizzell beat the offside trap but pulled his shot just wide of Johnson’s right hand post.

Then it was the turn of substitute Kwaku Nyame to test the Greenock keeper but his direct free kick came of the chest of Black and was cleared to safety.

Greenock were now sitting a little deeper and hitting Carluke on the break. In the 61st minute one such break had Alan Frizzell crossing the ball into Craig Brown and he should have burst the net from six yards but instead knocked it over the bar.

Then in the 63rd minute Carluke got a break when a great flighted corner by James Frame was headed into his own net from close range by Jamie Black to make the score 2-1 and give Carluke something to play for in the last 25 minutes.

At this point the weather and the state of the pitch were making it difficult for both sets of players to string any sort of passes together and chances were few and far between. It took till the 83rd minute for the next effort on goal when Greenock’s Daniel Smith broke away from the Rovers defence but as he was being closed down he chose to shoot and ballooned the ball over the bar.

Jamie Dickson came on for Carluke late on and had an effort that just went past Greenock’s right hand post but that was the last meaningful effort and the game was to end in a 2-1 victory to Greenock who probably just deserved it due to their first half performance.