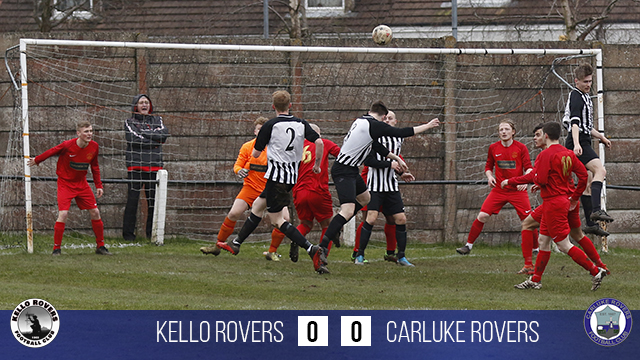 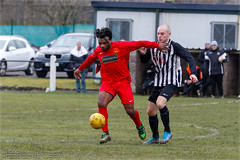 The Rovers visited their Kirkconnel rivals knowing a win would go a long way to securing their position in League 1. As it was a heavy pitch and windy conditions meant that Carluke, who were playing into the wind from the outset had a poor first half and a much better second half.

As early as the second minute a Kello corner wasn’t cleared well and was picked up again by a Kello player whose shot came off the Carluke upright. An early warning.

The match was played at pace with Carluke trying to play the ball on the ground, whereas their opponents, with the wind behind them, often resorted to launching the ball from deep in their own half into the Carluke box.

On 15 minutes an Eddie Haley shot from the edge of a crowded box looked goal bound, however it struck O’Reilly and it bounced out for a goal kick.

The Carluke defence were under considerable pressure for most of the first half, however Neossi and Lithgow were easily dealing with most of the long balls into the box from their hosts.

On 27 minutes a corner from Martin was headed on by Cassidy to Haley who should have scored but his header sailed over the Kello bar.

On 37 minutes Kello had a chance to open the scoring when another long ball into the Carluke box was not cleared well and Kello’s Bennie picked up the clearance and only had Brown to beat. The Carluke stopper however got his angles right, and the forward’s shot flew harmlessly past the Carluke upright. 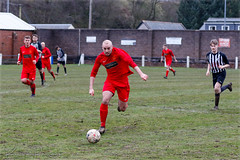 That was the last of any notable incidents of the half and I suspect both teams were happy to hear the referee’s whistle bringing the first half to a close.

Once again, the first significant moment of the half was created by the hosts. A poor Carluke clearance was picked up by Kello’s Armour whose shot from the edge of the box skimmed the top of the Carluke crossbar.

On 55 mins Kello were awarded a free kick just outside the Rovers box, their second within the space of a minute. The shot rebounded off the Carluke wall however it was a Kello player who picked up the rebound but could only fire it past Brown’s left-hand post.

On the hour mark an excellent pass from Cassidy through the Kello defence allowed Haley to run through on goal with only the keeper to beat. Regrettably his shot flew past the Kello upright.

A couple of minutes later it was the hosts turn to apply the pressure and a cross from the left in to the Carluke box, was cleared well by Neossi. However, it was picked up by Kello’s Kerr who managed to get a shot off under pressure. His effort looked as if it would break the deadlock. However, Brown in the Carluke goal pulled off a spectacular save and managed to parry the ball to safety.

Carluke were finding the conditions more favourable in the second half and were continuously pressing the Kello defence. Frame on the right was a constant threat and gave the Kello left back a torrid time with his close control, pace and deliveries into the box. The heavy pitch however was beginning to cut up badly and this ultimately affected the quality of the final ball. 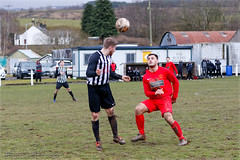 On 67 minutes another strong run from Cassidy through the middle of the park was finished with another defence splitting pass to Haley. Once again with only the keeper to beat the Carluke number 9 could not find a way past the home stopper and his shot trundled past the left hand upright.

On 77 minutes Frame weaved through the Kello defence on the left. He was tackled before he could get a shot off, however Kane picked up the loose ball just outside the box, but his shot flew harmlessly over the Kello crossbar.

With ten minutes left on the clock both teams knew that whoever scored would pick up the points. On 83 minutes Cassidy looked as though he might grab the points for Carluke. A characteristic run through the middle of the park to the edge of the box gave him the opportunity to seal the victory but his shot on goal failed to hit the target and the last real chance of the game was gone.
In the end a draw was probably a fair result, however both teams probably felt that if they took any of the chances made then one goal would have been enough. Ultimately the respective keepers managed to earn their team a hard fought point.