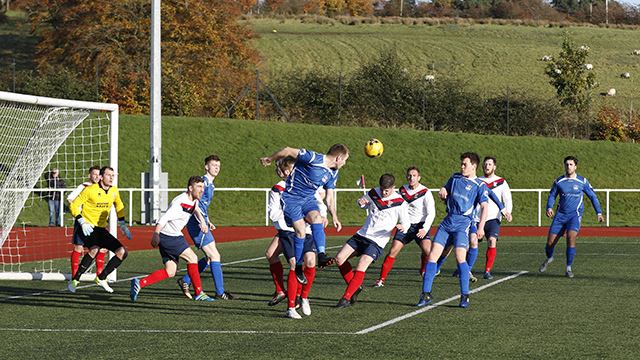 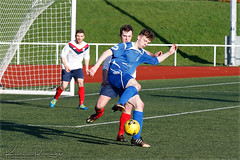 This was new manager John Dunn’s first league game in charge and if the home teams performance was a reflection of the manner and style of play he demands from the players there won’t be a fiver better spent on a Saturday afternoons entertainment in the town.

Carluke started the match, immediately displaying their intent to attack Vale of Leven with a new found determination, aggression and urgency and in the fourth minute a quickly taken short corner by right winger James Martin found Greg Kane on the edge of the box who’s crisply struck shot was finely saved by the Vale keeper low to his left hand post.

Rovers pressed for an early opening goal with Ian Watt having a couple of half chances blocked inside the oppositions box as they defended in numbers. 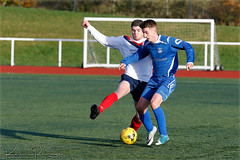 The deadlock was broken in the 15th minute completely against the run of play when Vale played a long ball out of defence down the right wing.

Carluke’s Centre half Aldin El Zubaidi was far too casual and short with his pass back to Keeper Halford allowing the Vale Centre forward to intercept the ball 20yds out and calmly slot the ball past the outrushing keeper.

From the re-start, Rovers continued to push forward and in the 20th minute debut striker Ryan Farrell came close to scoring linking with Mark Haddow on the edge of the Vale box only to see his shot fly inches past the post.

Just before half time Rovers were dealt a blow when Keeper Halford collected a high cross in a crowded Carluke penalty area only for him to land heavily on his left shoulder and was substituted for teenager David Thomson.

Half time 0-1 to Vale of Leven with Rovers having had 90% of play and possession, however this seeming frustration was relieved at the start of the second half when on 50 mins the Rovers equalised following a surging run by winger James Martin down the right flank who’s cross met the head of Sam Biggart who had timed his back post run to perfection. 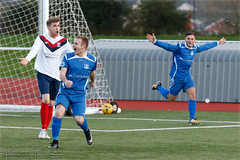 On the hour mark Vale equalised following non- existent Carluke marking at a corner with Vale striker running off a static defence to bullet in a header from 5yds out.

At 2-2 the game opened up with both teams sensing a winning goal was within reach.

Some old fashioned end to end football was witnessed interspersed with blatant fouls amongst the free flowing passing moves from both sides.

Rovers new boy Ryan Farrell was replaced by Mark Cassidy after 70mins and Biggart replaced by Eddie Haley on 75mins who’s first touch of the ball, 30 seconds after coming on found the back of the net following an Ian Watt cross to the back post.

Haley’s Comet secured a much needed 3 points for the Rovers and will provide a great degree of confidence going into this weekends away West of Scotland Cup tie against super leagues Auchinlek Talbot.