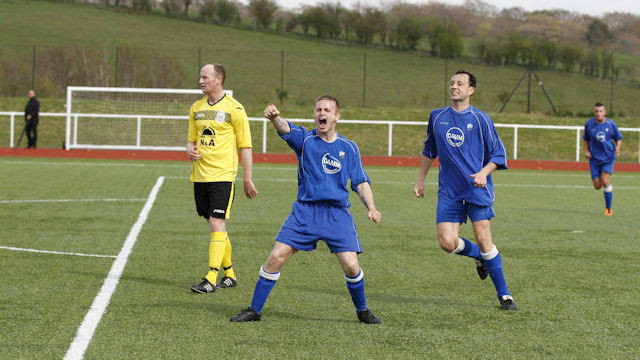 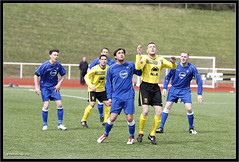 This match eventually was completed at the third time of asking after twice being abandoned.

The home side started well as they took the game to Bens and they took the lead in the 11th min after one of many challenges on Mark Haddow resulted in a free kick 25 yards out, Mark Weir took the kick and placed the ball low past the visiting keeper for1 -0 to the home side.

Rovers continued to press and had another chance a couple of minutes later when Weir was free on the left but his low cross was cut out and the chance was lost.
For some reason Carluke fell out of the match for a spell allowing Bens to press them back and it took a great block from Craig Stewart to keep them out in the 22nd min at the expense of a corner.

Rovers looked for a free kick as the corner was played in but nothing was given as keeper Gavin McLachlan flapped at the ball but the danger was eventually cleared.

Stewart was again on hand in the 27th min with a block after good work by Dean Kindlan ended with a poor ball that exposed the Rovers defence.

The visitors got back on level terms in the 29th min when their pressure ended with a clearance from Craig Stark falling to their left back who hit an excellent strike in to the corner of McLachlan’s net for 1-1.

Bens should have taken the lead in the 31st min when the Rovers defence were left appealing for an off side decision that did not come, but as the Bens man bore down on goal he tripped on the ball and the chance was lost.

The last chance of note of the first half fell to Gordon Murphy but his well struck shot from 35 yards saw the visiting keeper tip the ball over the bar for a corner that came to nothing. 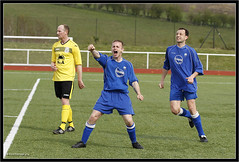 The start of the second half saw Rovers allow Bens to attack and a mistake from Stevie Murray let them in on the right but an excellent save from McLachlan kept the score at 1-1.

From ,his point Rovers got on top of the game and created a few chances with Kindlan and Marc Napier linking well on the right but Napiers low cross was cut out.

The 62nd min saw Ian Watt put in a good ball for 2nd half sub Darren Hamilton but his header was easily saved by the Bens keeper.

Murphy lost possession as Bens pressed on a rare occasion in the 2nd half but a low cross from the left was cut out by McLachlan and another chance for the visitors was lost.

In the 72nd min as the home side pressed the visitors back sub Jamie Dickson put a good ball in to Watt but despite his good control his parting shot was weak and easily saved.

The home side continued to press the Bens back and got their reward in the 79th min when a fantastic cross field ball from Kindlan found Watt on the right and as he got toward the bye line he hit a low shot which found the far corner of the net for 2-1 to the home side.

This goal saw the start of Carluke dominating the latter part of the match and they got another goal in the 89th min when a great lay off from Watt set Hamilton free on goal and a cool, low finish to the Bens keepers left made the score 3-1 to the Rovers.

This goal sparked ugly scenes as the Bens saw the match slip away from them and Richie Lovering lashed out at Stewart with a vicious punch that saw him ordered off and Stewart end up in Hospital but none of this took the shine from the Rovers performance that saw them back on top of the league.