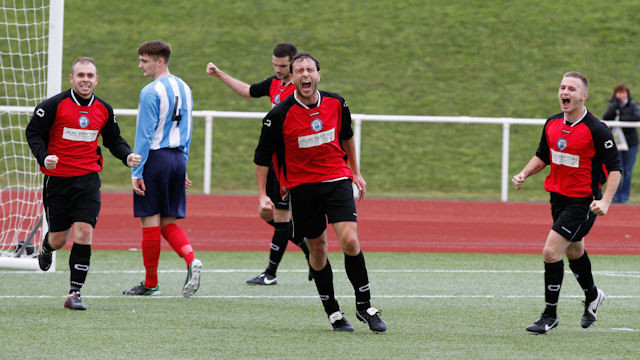 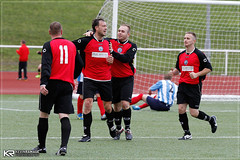 Rovers search for a win continues after this poor performance ended in another home league defeat.

The first half saw Rovers play some good football with the chances starting in the 11th min when Gary Gow played Ian Watt in but the strikers effort was high and wide of the target, this was quickly followed by Watt putting a cross in for Gordon Murphy but his shot on goal was blocked.

The 20th min saw Rovers awarded a penalty kick after a crazy hand ball in the box by a Larky defender but Mark Weir’s effort was at a good height for the keeper and was saved.

Carluke continued to make chances with a great ball in from Dean Kindlan only just being missed by Watt, then Weir picked up a loose ball in the middle of the goal but his effort was wide of the Larky post.

The deadlock was broken in the 31st minute when good work from Greig Cavanagh set Jonny Wilson free on the right and his cross was met by Murphy who guided a low shot in to the net for 1-0 to the home side.

Larky showed they were capable of attacking ass well when a free kick in to the Rovers area was deflected for a corner that was cleared for another, but both kicks were cleared by the Rovers defence.
The last chance of the first half fell to Carluke when good link up between Cavanagh and Wilson again saw the ball end up in the path of Murphy but his effort was always rising and went over the bar. 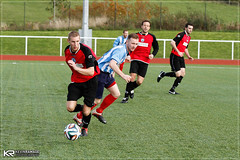 The early part of the second half saw Rovers make and squander a few chances to put daylight between themselves and Larkhall when first good work set Wilson free on the right, Cavanagh met his cross with an excellent low shot but the Larky keeper brought off a great save to keep the score at 1-0.

Cavanagh had an effort blocked in the 50th min before Watt saw a couple of chances go past the post as Rovers struggled to keep control of the match.

Larkhall grew into the match as Rovers missed these chances and got an equalising goal in the 65th min when a hopeful ball was headed back towards the keeper by Craig Stewart but fell short and the Larky striker was quickest to react rounding Jonny Grier before slipping thee ball home for 1-1.

Grier was called in to action again in the 70th min when a long ball firstly eluded him before hitting the back post but he reacted well and cleared the second effort.

Carluke welcomed back injury hit striker Ryan Smillie in a effort to get back in front in the match but his run on the left ended with a save from the visiting keeper.

Carluke lost what proved to be the winning goal for Larky in the 86th min when they attacked down the left with Grier initially saving the low shot but the ball went across goal and Larkhall were quickest to react and the loose ball was stabbed home for 2-1.