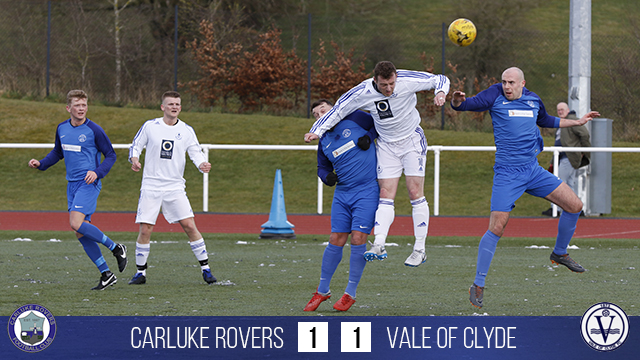 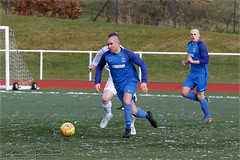 An hour before kick off this game looked in serious doubt of being played.

A hailstorm had covered the pitch completely and only the intervention of the stalwarts of the Carluke committee in clearing the lines and both penalty boxes convinced the referee to allow the game to go ahead.

Both teams started well however it was the visitors who had the first clear cut chance when on the 12 minute mark a shot from outside the Carluke box looked goal bound only for it to strike the Rovers left hand post and rebound back into play.

A couple of minutes later Carluke’s first real chance came when a free kick was awarded just outside the Vale of Clyde box, Biggart’s powerful left foot shot flew past the wall and into the arms of the Vale keeper, who failed to hold the shot but was quick enough to gather the ball to thwart the incoming Rovers players.

Carluke continued to press and a few minutes later a Biggart shot was again dropped by the visitors keeper but Larkin’s follow up shot couldn’t find the target.

Carluke’s best chance of the first half came 10 minutes later when McKenna headed on a pass from Weir to put Larkin through with only the keeper to beat. His shot required an excellent save from Vale stopper to keep the game goalless.

On 35 minutes another Biggart shot was blocked by the Vale defence and Larkin pounced on the free ball but his shot flew harmlessly past the Vale’s left hand post. 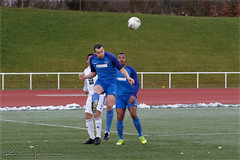 Despite the Carluke pressure it was the visitors who broke the deadlock 5 minutes before the break.

For the second week in a row a corner from the right wasn’t dealt with by the Carluke defence at the front post.

The corner was delivered at height but no-one, including the home keeper were able to stop it before it struck the Carluke captain Weir on the shoulder and rebounded into the goal.

After the interval it was more of the same from both teams.

However it was the visitors who seemed to be more effective with long balls out of defence, usually from the keeper, which the home defence, particularly on the left, couldn’t deal with.

Despite this pressure it was Carluke who managed to find the equaliser.

Once again it was the industrious Larkin at the heart of it, Eight minutes into the half a through ball found him just outside the visitors box.

With his back to the goal, he managed to turn the defender behind him and his quick and well placed shot sailed past the Vale keeper.

Both teams battled on to find the winning goal, with the visitors continuing to have most of the possession. 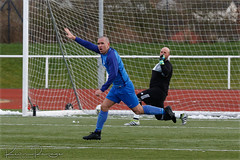 However the game became fractured, with both sides becoming frustrated at the lack serious chances.

As the game headed for its deadlock conclusion the referee was continually called upon to stop the game for unnecessary and increasingly dangerous fouls.

When the final whistle sounded the expletives from both dugouts was a testament to the point that both sides felt that they should have won the game and that the points dropped seriously harmed their promotion hopes.

They will be hoping to replicate their earlier win over the struggling Ayrshire side.

However they will need to note that their visitors last win was 4 weeks ago, away to Vale of Clyde.