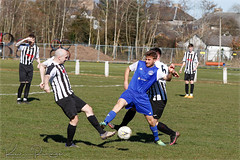 On the hottest day of the year so far, the Rovers returned to competitive football 5 weeks after their last game.

The fixture was clearly a bottom of the table clash but proved to be a competitive and, at times, feisty affair, between two teams determined to banish a poor season with a decisive victory.
And it was the home side who struck first when they were awarded a very soft penalty in the 6th minute. A cross ball hit Jessimer on the upper arm as he turned to block the cross just inside the box and the referee decide that it was a deliberate handball!

Carluke pressed for an equaliser and with Wilson’s strike on 12 minutes it looked as though it might come quickly but his powerful shot hit the bar. A few minutes later Murphy hit a speculative shot from just inside the Albert half which the keeper fumbled, unfortunately there were no Rovers players following in to attack the loose ball.

Carluke had a strong grip on the game with their midfield controlling the centre of the park and new signing Barton proving a handful for the experienced Albert defenders.

On 20 minutes a long ball through to Frame and quick shot from the Rovers winger was only saved by the outstretched leg of the Albert keeper. 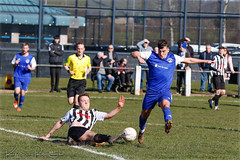 As the visitors continued to apply pressure the home side were limited to long balls out from their keeper which were managed easily by the Carluke defence.

A Rovers corner on 34 minutes ran through the box and found Wilson just outside the box. His powerful shot again looked as though it was net bound but once again the frame of the goal saved Albert.

Another long ball from the Albert defence on 40 minutes found the lone home striker in space and with only Brown to beat it looked as though Albert would extend their lead However the Rovers stopper saved the incoming shot well, putting it out for a corner.

With the second half under way both teams were pressing to find the next goal. On 57 mins another long Albert ball found their player in space, but with only Brown to beat he shot harmlessly over the bar.
On the hour mark, Carluke’s equaliser looked certain when Rover’s midfielder Motherwell was brought down by the home keeper inside the box. It was obvious to everyone that there was clear contact between to the two players however the referee decided that the Rovers player dived and booked him for simulation.

Carluke were not to be denied and they scored the equaliser just three minutes later. A cross into the box was met by Lawlor whose shot went in off the left hand upright.

Remarkably just four minutes on 67 minutes Carluke took the lead when Duddy put a ball through to Frame and his speed was too much for the Albert defender and he hauled him to the ground. Duddy despatched the resultant penalty expertly to give the Rovers a 2-1 lead.

Carluke extended their lead on 70 minutes when the increasingly influential Duddy crossed into the home box from the left. His cross was deflected by Cowan into the path of Barton who side footed it into the Albert net. 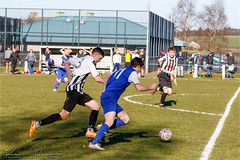 The two goal lead lasted until the 76th minute. A shot on the Rovers goal was not cleared by the defence and the scramble to get to the loose the ball inside the six yard box was won by an Albert player who squeezed the ball between Brown and his left hand post.

The home side pressed for an equaliser. As the visitors retreated the play was inevitably concentrated in the Carluke half for the last 15 minutes of the game.

With the clock running out the home side were awarded a free kick just inside the Carluke half. It was taken by the Albert keeper, and he fired his cross into a very crowded Rover’s box. The cross was cleared for a corner. When the corner was taken, we were 3 minutes into time added on by the referee. The corner kick was met by the unmarked Albert keeper who headed the equaliser into the top corner of the Rovers net from just outside the six yard box.

Carluke’s final league fixture of the season is next week at local rivals Newmains United.