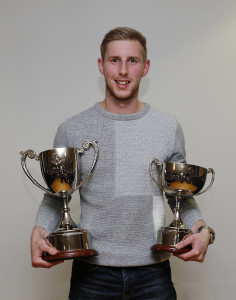 It’s a double for Jonny

It had been a difficult day for everyone at the club following a poor result on the park, thankfully this did not put off a decent crowd attending the Carluke Rovers Player of the year night.

A healthy attendance ensured a good night was had by all along with some much needed funds for the club thanks to an enjoyable race night event.

The Player of the year night feature 3 prizes.

Players Player of the year as voted by all the players and seen nominations for Lewis McDougall, Jonny Wilson, Ian Watt and Ryan Smillie.

The winner and Players Player of the Year 2016 – Jonny Wilson 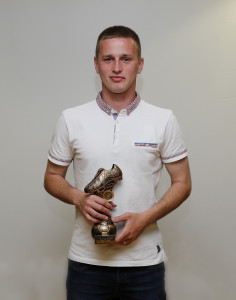 It was then onto the Player of the Year award, an award voted by Committee and Management. There were 3 nominations for the award, Lewis McDougall, Jonny Wilson and Mark Haddow.

The winner and Player of the Year 2016 – Jonny Wilson

The final award of the evening was for Top Goal Scorer 2016. It was pretty close between Ryan Smillie and Ian Watt. The winner edging it by 2 goals thanks to his goal earlier in the day. 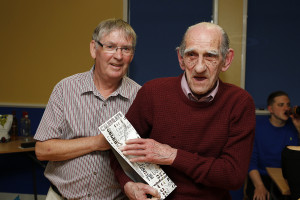 A special thanks was also made to Supporters and Volunteer, Ronnie Muirhead, Brian Muirhead, Brian Smith and John ‘Simmy’ Horn. Simmy receiving the biggest cheers and chant of the evening as he looks forward to his upcoming 90th birthday.