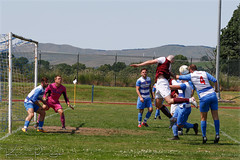 Carluke Rovers travelled to Sanquhar to face Nithsdale Wanderers in their final pre-season friendly prior to their WOSFL Conference B league opener away to Gartcairn.

It was a gloriously hot day with high temperatures, thankfully both teams and the referee agreed to rolling subs and water breaks.

The Lorimer park was pretty dry and hard and caused a bit of issue for both teams as some unexpected bounces and bobble made it difficult for quality on the ground football.

Nithsdale stunned the Rovers 5 minutes into the game as some poor defending seen Nithsdale number 10 easily slot past the helpless Brown in goal.

Carluke were denied what looked like a stone wall penalty 23 minutes in as Cassidy was pushed in the back as he rose to head the ball goalward but claims were waved away by the ref.

Rovers were struggling to get their passing game going that had seen then play so well the previous week against Mid Annandale.

Just before half time the Rovers had another penalty claim waved away as the young Nithsdale keeper appeared to drag down Marc Smith after he fumbled a cross ball.

To make matters worse for the Rovers Nithsdale almost immediately went up the park and scored their second. 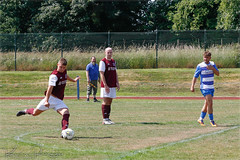 Carluke had to up their game if they wanted to take anything away from this match and they proved more than capable.

6 minutes into the second half Carluke’s latest signing Ryan Watt his a fantastic lob from outside the box into the top corner leaving the young Nithsdale keeper helpless.

Rovers were now were in the ascendency and were creating better opportunities than their first half, the reward came 15 minutes in as Cassidy was fouled on the edge of the Nithsdale box.

Marc Smith stepped up and sent a great free kick through the Nithsdale wall beyond the diving keeper who almost got a hand on the ball but could do no more, the game now level at 2-2.

There were chances for both sides to take the lead again and on 75 minutes Nithsdale were unlucky not to go ahead as their striker mishit a volley from yards out and fired wide. 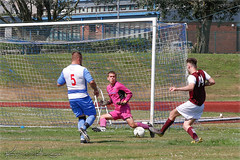 With only around 5 minutes of the match remaining Ryan Watt broke though into the Nithsdale box, rode a tackle from the Nithsdale defender and calmly slotted a fine finish under the diving keeper.

With Carluke now 3-2 ahead there were no real great chances after that for either team and Rovers held on for the win.

A tough workout for both teams on an extremely hot afternoon. Thanks to Nithsdale for the game and good luck to them in the forthcoming season.