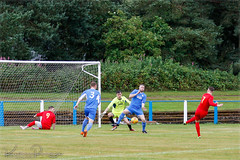 This was the second meeting between these two local rivals in the same number of weeks following a penalties win by Carluke in the Clydesdale Cup. This game however was more important as it marked the official start of the season as they met in the Sectional League Cup.

The game was played at Lanark in very difficult conditions with persistent heavy rain which the playing surface stood up to very well throughout.

It didn’t take for first goal to arrive as in the first minute a cross from the right from Ross McNeill was spilled by the Lanark Keeper and Craig Grierson was on hand to knock the ball into the empty net making it 1-0 to Carluke.

In the 5th minute the ball was slipped through to Murray Loudon who when running in on goal was pulled down by Lanark defender Cammy Lawson who was shown a yellow card which was to prove expensive later in the game. The resultant free kick from Shaun McKenna was easily cleared by the Lanark defence.

In the ninth minute Loudon found himself clear in on goal with only the keeper to beat. He decided to try and take the ball round the Lanark keeper but he was alert enough to get his right foot to the ball and deflected it out of play.

There was then a period where neither midfield was in control and passes were going astray on the slick surface and it took till the 20th minute for the next piece of serious action. The ball was slid through the Carluke defence and it was a case of who was going to get there first between the Lanark striker and the Carluke keeper, Dan Terry. Unfortunately for Carluke it was the Lanark player who got there first as it appeared Terry was slightly slow off his line to gather. The resultant effect was the Lanark striker being brought down and the Referee pointing to the spot. The resultant penalty was struck by Hill with the Keeper having little chance. 1-1. 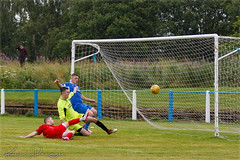 This gave Lanark a lift and for the next 10 minutes they started to play with more authority and in the created a couple of half chances before in the 36th minute a corner on the right was flicked on via the head of Cammy Lawson to Lewis Hill who found the back of the net with a deft header. 2-1 to Lanark. The game was being played in the middle of the park at this stage with neither midfield gaining any real control and as the match was petering out to half time an innocuous challenge by Drew Lindsay on the Lanark midfielder appeared to be on the edge of the box but the Referee pointed straight to the spot for a second penalty to Lanark much to the consternation of the both the Carluke players and management. However again the penalty was successfully dispatched by Lanark’s Lewis Hill completing his hat-trick. This made the halftime score 3-1 in favour of Lanark which was possibly not a fair reflection on what had been a fairly even first half.

Carluke didn’t make any changes during halftime content that they could find a way back into the game and in the 57th minute that proved to be the case when Loudon tapped the ball round the Lanark keeper and although he slipped he managed to regain his composure and fire the ball into the roof the net from close range to make it 3-2.

Unfortunately for Carluke and Loudon a few minutes later he was involved in an altercation on the touchline with the Lanark fullback where hands were lifted in and the referee had no hesitation in brandishing a straight red card to Loudon and a yellow to the Lanark No3.

However he was quickly followed by Lanark central defender Cammy Lawson who was dismissed with a second yellow card for time wasting. 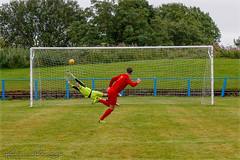 With both teams down to ten men it was clear that there was still not enough penetration coming from the Carluke midfield and in the 65th minute Mark Weir replaced Maxine Neossi and five minutes later James McAllister came on in defence with Mark Cassidy moving into midfield to replace Aaron Neill . Immediately there was a bit more urgency from the middle of park and crisper passing into the strikers. However it was a well hit but speculative shot from Peter Byrne that took a slight deflection before nestling in the bottom of the Lanark net for 3-3 which was a fairer reflection on the play overall. There were further opportunities as Carluke pushed for the winner but in the end the ref blew the final whistle at 3-3 and the game finished in a draw.

The rules of the League Cup mean that there has to be a winner and so to penalties we went. The first 4 penalties were expertly taken but with the last Lanark penalty was well saved by Dan Terry fittingly leaving Craig Grierson to finish the scoring that he had started at the beginning of the game.