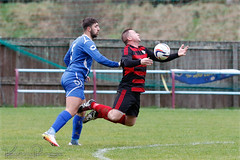 When the 2nd round draw of this year’s Scottish cup was made, there were some who dreamed of a repeat of the Rovers run in last years competition.

Unfortunately that dream had evaporated as early as the 20th minute of the match when the hosts had breached the Carluke defence for the third time.

The new management team, in the dugout for the first time, would have been happy with the way their charges started the game.

The clearance from a 4th minute corner found Kane just inside the Kirkintilloch box and his shot narrowly missed on the outside of the right hand post.

Rob Roy immediately broke forward and were given a free kick just outside Carluke’s box.

The shot was well struck and required an excellent save from Thomson in the Carluke goal to keep the scores level. 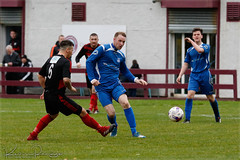 Kirkintilloch pressed hard for the opener and it came in the 8th minute when a scrambled Carluke clearance broke to Watt of Rob Roy.

His initial shot was saved but the rebound was skilfully pushed past Thomson.

Carluke were playing with a strong wind behind them and were struggling to control through passes to the front men of Cassidy and Haley.

As a consequence strong play in possession by the Rovers midfield frequently broke down when the passes into the final third failed to find a blue shirt.

The Carluke goal was eventually breached for a second time just before the quarter hour mark. A succession of near misses, including one off the woodwork eventually provided the hosts with their second goal.

The third Kirkintilloch goal was scored in the 21st minute. A strong run down the left side and cross to the near post found Sawyers who finished well for Rob Roy’s third.

When Kirkintilloch scored their 4th goal on the half hour and their 5th ten minutes later, the tie was effectively over as a competitive match

After the break Carluke restored some pride with a spirited performance throughout the second half. 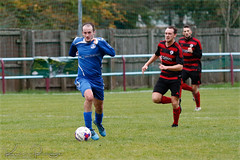 The final goal of the tie was scored in the 51st minute when Rob Roy were awarded a very soft penalty.

A game of two halves certainly. The hosts were clearly the better side and were able to use the wind to their considerable advantage in the first half.

The Rovers looked more composed after the break and would have been happier with their second half performance.