Colin not counting his chickens

But the boss says it doesn’t add up that his table-topping Central First Division side are rated promotion certainties.

The feel-good factor comes from the chasing pack sitting a further six points adrift, but a guarded Slater reckons it is too early to get carried away.

He said: “We are now in the position of having only seven league matches left to play so it is imperative we keep our winning run going .

“Hand on heart I would have to say Bellshill – barring a catastrophic collapse – are in a very strong position.

“That leaves Larkhall, Shettleston, Benburb, Dunipace, Neilston and us battling for the remaining promotion place.” 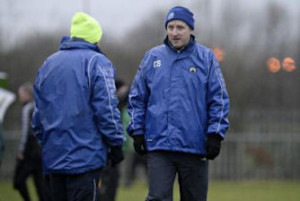 Slater was delighted with the debut display of one-time Clyde and Pollok ace Kane who operated very effectively in a midfield holding role and even managed to get his name on the scoresheet against the Shire despite being better known as an out-and-out defender.

And another boost came from talisman striker Watt netting a goal only days after pledging his long-term future to the Lanarkshire outfit.

Ahead of this weekend’s visit of Neilston, the Rovers gaffer added: “One of John’s great assets is his ability to play in a variety of positions and I can envisage his versatility proving a real asset once we start playing midweek games.

” As for Ian, he is playing at the very top of his game and is proving to be a real thorn in the flesh of defenders at this level.

“He is brave as they come and is a grafter with pace to burn.

“It’s little wonder the likes of Linlithgow Rose and Rob Roy have asked after him.

“But, by the same token, we as a club can’t afford to lose the likes of him if our aim is to continue making progress in the Juniors.

“For that very reason we went out on a limb last midweek to offer him an extended contract deal. Ian is enjoying his football so much that he had no qualms about signing up to commit himself to Carluke Rovers for the next two years.”