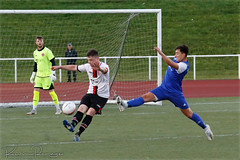 Another late night midweek 8:30pm kickoff for Carluke Rovers against tough competition in the form of St Cadocs who visited unbeaten so far this season. Carluke were still without Cassidy and Stark through injury and that was only going to be compounded with further injuries during the game which would have some bearing on the outcome.

It was clear from the outset that St Cadocs were top of the league for a reason. They were knocking the ball about and making good runs off the front men. That said Carluke were coping well with this and weren’t threatened until the 15th minute when a neat interplay through the middle found St Cadocs No 15 whose left foot shot was easily saved by Adam Brown in the Carluke goal. However this was a short lived respite when a minute later St Cadocs got the opener. A low corner was fired in from the left and was missed by a couple of players finding Dykes who fired home from the 12 yards out to make the score 0-1 to St Cadocs.

Carluke were well in the game though and nearly got an equaliser when the St Cadocs defence failed to clear a long free kick and the ball broke to Graeme Goodall but his shot hit the outside of the post. The play was now end to end at this stage and it was St Cadocs who went close next when in the 24th minute a great ball across goal just missed the outstretched foot of Arron Miller. 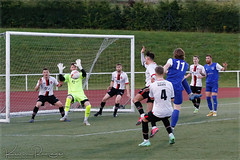 It was Carluke who were to threaten next when Dillon Duddy received the ball on the left and cut inside across the 18 yard box but his effort only found the side netting. This was followed by a freekick from 30 yards for St Cadocs which Brown in the Carluke goal could only parry. Fortunately the two St Cadocs players, who were first to react, got in each others way and the ball was knocked to safety for a goal kick.

Carluke’s best chance of the first half came in the 42nd minute when the ball broke to Duddy in the six yard box following a scramble in the St Cadocs box. Unfortunately the shot was snatched at and the ball sailed harmlessly over the bar. This was the last action of the first half and St Cadocs held a slender lead of 0-1.

The second half got underway with Carluke confident there was a way back but the second half was to be badly disrupted for them with injuries to several players. Firstly just after the start of the second half centre midfielder Greg Kane had to be substituted as he was feeling unwell. He was replaced by striker Ryan Watt in a positive move to try and get the equaliser. Unfortunately he wasn’t on long when St Cadocs got their second. They took a quick throw down the left, deep in Carluke’s half and Moore fired in a low cross that was easily converted by Arron Miller to make the score 0-2. 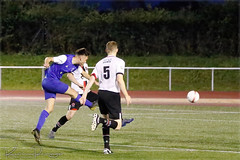 It would only take a further 5 minutes for St Cadocs to get their third when a pass through the Rovers rearguard found Milller who scored from close range for St Cadocs third and his second.

However Carluke didn’t give up the fight and 2 minutes later they finally go on the scoresheet. A good interception by midfielder Marc Smith saw him win the ball and run through on the St Cadocs defence. He passed the ball to Ryan Watt who let fly with a thunderous 25 yard shot that went in off the underside of the bar leaving the St Cadocs keeper helpless 1-3.

It was at this point that Rovers bad luck struck with a catalogue of injuries in quick succession. Firstly keeper Adam Brown had to be replaced by keeper Dean Wilson following a foot injury. Next it was the turn of Tayler Jessimer who was replaced by Mark O’Reilly. With Carluke having used all three subs they were reduced to ten men when the trialist centre half also had to leave the field with a wrist sprain.