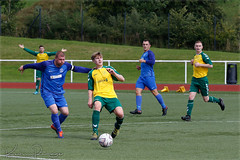 Rovers looked on course to secure a home point on Saturday but were victims of a late smash and grab by St Anthony’s.

The opening minutes of the game were feisty and frantic with Rovers keeper Tobin facing a 1:1 spread his body effectively to block a close range shot from the Ants centre forward in the third minute.

Rovers first threatening move came in the tenth minute when Lowdon curled in a deep cross from the right wing towards the back post with Haley just failing to connect from 5 yards out.

Three minutes later another Lowdon cross was met by McKenna at the back post but his shot was blocked on the goal line then cleared upfield.

On 22 minutes Rovers opened the scoring after a bizarre left wing cross come shot from Biggart looped over the Ants keeper into the net. 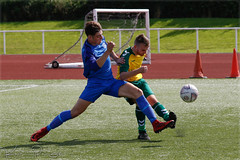 Carluke should have gone two ahead three minutes later when another Lowdon cross was headed back across the face of goal by Haley to McKenna whose shot was saved by the sprawling keepers legs.

As the visitors pressed for an equaliser Tobin again pulled off a point blank save on the stroke of half time.

Two minutes into the second half and the visitors drew level with the Rovers defence all looking at each other with no one reacting as a loose cross ball was dispatched into the net from inside the penalty box.

On 55 minutes Weir released Biggart down the left wing who delivered a strikers dream of a ball across the face of an open goal with Rovers forwards nowhere to be seen.

Two minutes later a Mark Weir shot from 35 yards was well saved by the Ants keeper who dived full stretch down to his left hand post to turn the ball round for a corner.

Biggart curled the corner onto the head of Cassidy at the back post only to see it headed off the line to safety.

On 60 minutes another 35 yard long range Weir shot dipped late and crashed off the bar with the keeper rooted to his line
. 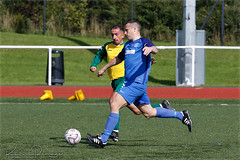 The loose ball was gathered by Byrne on the left edge of the box  who found Haley with a neat pass but his shot was blocked on the goal line with the rebound shot from Biggart also blocked on the line.

Rovers looked increasingly frustrated midway through the second half resorting to long balls which were dealt with comfortably by the Ants defense.

With five minutes remaining Rovers keeper looked to be coming for a long and high  Ants  clearance with the ball dropping into the left corner of the box.

He elected to stay on his line allowing the striker to cut inside a defender and slot the ball under his body into the net.

Rovers were left to lick their wounds at chances created but not taken which is increasingly becoming a feature of their play so far this season.