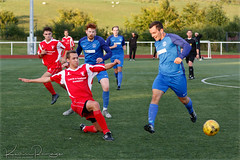 Carluke must have been hoping that they could build on the success of the weekend and record their first win over Lanark in recent times. They would ultimately be disappointed.

Rovers started well and dominated possession for most of the first half.

The main threat from the visitors came through long balls out of defence to former Carluke stalwart Watt to run onto in the right side channel. 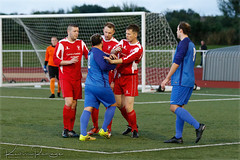 As seems to be the case this season Carluke’s hard work was undone by defensive errors.

With 10 minutes left of the first half The Rovers defence failed to deal with a through ball and Watt was able to score from a tight angle on the right.

The second half had barely started when once again Annetts ran onto a through ball in the Rovers box and Tweedlie did what he failed to do for the first goal and dived for the oncoming ball.

When the Lanark forward was upended the referee decided that the challenge was late and awarded a penalty.

Understandably a second goal so quickly in the second half took the wind out of the Rovers and their opponents took advantage to enjoy their strongest spell of the game.

However they failed to capitalise on their possession and the Rovers gradually began to dominate play again. 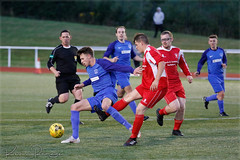 In the 82 minute their endeavours were finally rewarded.

An excellent shot from Cassidy from 25 yards took a slight deflection which left the Lanark keeper flatfooted.

Carluke continued to press for an equaliser, and in the final few minutes the clearest chance fell to Biggart.

After a strong run on the left side, his pace took him across the visitors defence, and with only the keeper to beat he shot with his weaker right foot only to see it fly past the upright.

Carluke deserved more from this game and will go to Lesmahagow on Wednesday evening hoping that they can record their second win in the opening cup competition of the new season.