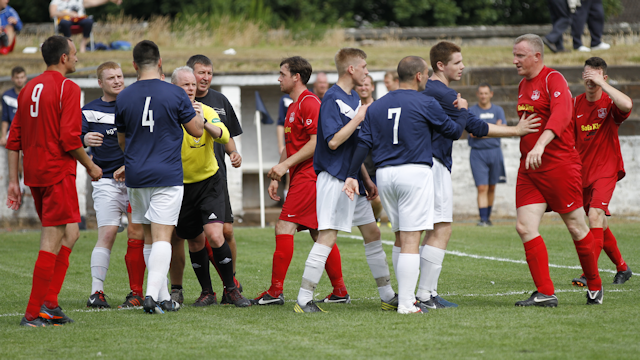 Carluke made chance after chance in this challenge match and still came away on the end of single goal defeat.

The match started with a chance for Stuart Arnott who was through on goal on the right but chose to pass inside and the chance was lost, but the Rovers continued to press forward and the right hand side combination of Stuart Hall and Craig Stewart were creating openings against their opponents left back. As is often the case it was Vale of Leven who opened the scoring with their first attack of the match which gained a corner, this was swung in and with no marking whatsoever their big number eleven headed home for 1-0 after 11 mins.

Carlukes pressure eventually paid off in the 23rd min when a good through ball to Arnott saw him round the keeper before slotting the ball home for 1-1. The visitors took the lead their play deserved in the 35th min when a ball to Gordon Murphy on the left saw him show excellent control before rifling home an unstoppable shot for 2-1 to Carluke Rovers.

On the run up to half time a loose ball from Stevie Murray fell to Vale of Leven and with no apparent danger their right midfielder hit a terrific shot high in to Craig Browns net for a half time score of 2-2. The second half saw a few enforced changes to the Rovers line up with first Arnott then his replacement in attack Greg Cavanagh having to come off leaving Stephen Ferguson to lead the line, his first chance to shine came in the 47th min when a ball from Murray saw him set up on goal but his chipped effort went well over the bar.

The chances continued to fall to Carluke with Murphy setting up Ryan Murdoch but when it looked as if he should square the ball he elected to shoot and the home keeper saved well.
Probably the best move from Carluke came in the 66th min when Dan Napier, and Mark Haddow linked up well to set Murphy free on the left but his poor cross caused no problems for the Vale defence. Ferguson had another chance to put The Rovers in front in the 69th min when he was clean through but a slight delay before shooting allowed the home keeper to bring off a good save.

Vales best move of the match saw them take the lead for the second time in the match as they worked the ball right across the middle of the park before a low cross from the left was tapped home for 3-2 this after 71 mins. The rest of the match followed much the same pattern as earlier with chances falling to Ferguson, Murphy and Hall but all were squandered and Rovers slipped to their first pre-season defeat, this despite the enforced introduction of manager Colin Slater in the 75th min when he replaced Stuart Grant.