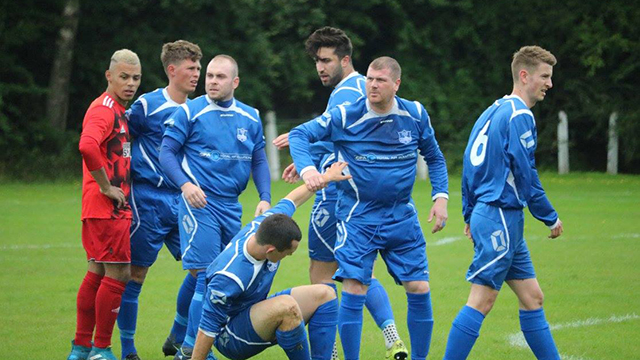 Carluke started this game knowing that a win was vital to get the season off to a good start and ultimately that is what they delivered.

The early stages of the match proved to be quite uncomfortable for Rovers with the home side forcing the play and winning a succession of corners, they could have opened the scoring when they broke after 14 mins but a good save from David Thomson in the Carluke goal kept the scores level.

Newmains did however take the lead a couple of minutes later though when yet another corner was not cleared by the Carluke defence and a header beat Thomson for 1-0.

Rovers eventually dragged themselves in to the match and came close in the 21st min when Mark Cassidy collected the ball from a throw in , turned then hit a good shot that hit the bar before going over.

Cassidy was again involved when Rovers drew level as he set Ian Watt free on the right with the striker cutting in to the Newmains box before firing the ball past the home keeper for 1-1.

Rovers were making better use of the ball from this point and they were unlucky when a ball in to the newmains defence was scrambled clear.

Cassidy made a couple of good runs down the left with good balls across goal at the end of them but a mix of good defending and bad luck saw Rovers fail to take advantage of any of them.

With half time approaching a good free kick from Mark Weir found the head of Reece Lowdon but his effort was saved by the home keeper.

Carluke started the second half better creating a couple of early chances but again neither of them were taken and the scores remained level.

The visitors did take the lead in the 57th min though when Lowdon was brought down in the Newmains box at the expense of a penalty which was taken by Weir who hammered the ball home for 2-1.

Watt created yet another chance for Carluke on 62 mins with a good run on the right but again his cut back found no takers.

In 66 mins Aldin El Zoubaidi set James Martin free on the left, the winger cut inside beating two defenders before hitting a great shot that looked to be heading for the net but the ball hit the post before being cleared.

Martin was again involved in the 3rd Rovers goal when he won a free kick that was floated in to the box by Weir with Lowdon being first to react with a diving header that found the corner of the net for 3-1.

The visitors controlled the remainder of the match with Watt continuing to cause problems for the home defence, he brought out two fine saves in quick succession from the home keeper before yet another effort was turned away for a corner, when this was played the ball eventually fell to Watt who struck his second and Carlukes fourth of the match for 4-1.

The scoring was rounded off in the 89 min when another excellent run from Martin on the left ended with a good low cut back the was driven home by the inrushing Scott Blacklaw to give a final score of 5-1 to the visiting Rovers.