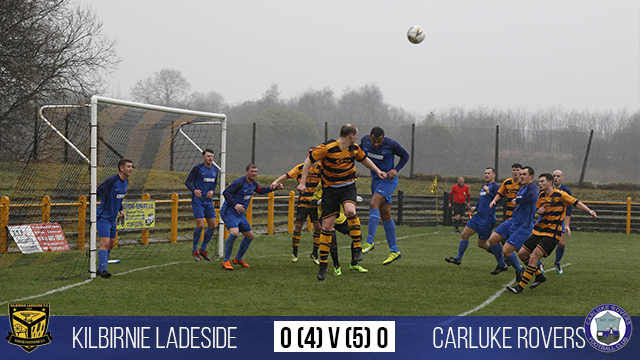 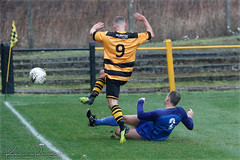 Carluke travelled to North Ayrshire to take on Premiership side Kilbirnie Ladeside in the 4th round of the West of Scotland Cup.

The home side started strongly and their early pressure almost paid off. In the 4th minute they had the ball in the back of the Rovers net only to have it written off as offside.

However Carluke responded well to the constant pressure from the Premiership side with individual battles being fought and won across the park. In particular the back 4 of Chiedu, McAllister, Cassidy and Biggart were excellent.

In the 14th minute a cross from Grierson found Lafferty, who looked set to open the scoring only to be called offside.
Kilbirnie responded a minute later with a speculative shot which Cherrie easily tipped over.

On the 41st minute Carluke’s first shot on target came through Weir with a 25 yard shot which was saved well by the home keeper.
Once again Kilbirnie responded immediately with a ball through to their number 9, but Cherrie in the Rovers goal was well positioned and the striker could only shoot in to the side netting.

After the break Kilbirnie renewed their forceful attack on the Carluke back line. On the 50th minute the home side were awarded a free kick 20 yards out. 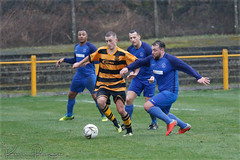 The subsequent shot was well struck however once again Cherrie dealt with it easily and touched it over the crossbar for a corner.

Carluke were beginning to edge the midfield battle and on 53 minutes a shot by Weir from 20 yards was spilled by the home keeper and Carluke’s McDonald was quick to chase down the loose ball but the home keeper managed to smother it to keep the scores level.

The Carluke defence continued their excellent work rate to keep the Kilbirnie attack at bay, with Cassidy and McAllister frequently snuffing out the danger from the Premiership attackers.

On 80 minutes Carluke almost opened the scoring through McDonald. Grierson was fouled on the left, 10 yards outside the box. The free kick was taken by Biggart who rifled an excellent ball to McDonald in the home 6 yard box.

His shot required a superb save from the Kilbirnie keeper.

Both sides continued to press for a winner but the referee eventually called time meaning the result of the match would be determined by penalties.

Carluke took the first penalty and it was scored by Weir followed by successful strikes by Cassidy and Biggart.

When Kilbirnie blasted their 3rd penalty over the bar Lafferty scored his penalty to put the visitors in the lead by 4-2. 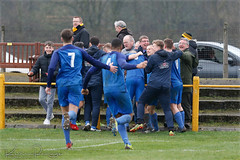 However McDonald missed Carluke’s 5th penalty and when Kilbirnie scored their 5th the scores were level at 4-4.

Kane scored the Rovers 6th penalty which meant that if Cherrie could save the next penalty Carluke would be through.

He duly obliged with a magnificent save and the team from the lowest division had overcome the side from the top tier.

There is no doubt that this is Carluke’s best result of the season, and everyone who pulled on a Rovers shirt today contributed to a magnificent victory. We are now in the draw for the Quarter final ties, although no date has yet been set for draw.