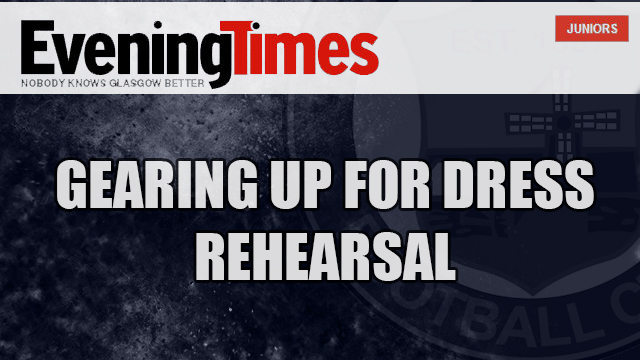 Gearing up for dress rehearsal

Carluke Rovers have featured again in the Evening Times as part of their juniors section.

TEAM bosses Colin Slater and David Greig reckon this weekend’s Central Second Division clash between Carluke Rovers and Gartcairn will have no bearing on the forthcoming Scottish Junior Cup tie between the clubs.

The meeting at the John Cummings Stadium had the look of an intriguing contest even before Tuesday afternoon’s fifth-round draw set them on a collision course at the MTC Stadium in a fortnight’s time.

Slater is out to boost fourth-placed Carluke’s push for promotion while visiting gaffer Greig believes his side’s own hopes of a step-up will be put to the sword unless Gartcairn come out on top.

Yet another motivation for the Rovers comes from wanting to avenge a 6-1 hammering back in late October that remains their heaviest league defeat to date.

Slater admitted: “In many respect that embarrassing Gartcairn going-over was the spark that lit the fuse for us going on an unbeaten run [seven wins and one draw] ever since.

“And our need for the points to keep applying pressure on the teams above us and not least of all to firstly try and overhaul third-placed Lanark United mean we cannot hold anything in reserve on Saturday, not that we ever would because I firmly believe the Cup will look after itself on the day and will not be affected by results between the clubs.

“In much the same way, our 6-1 skelping will not affect this week’s outcome considering that Gartcairn have a new manager in Davie and he has already put his stamp on the team with a whole raft of changes on the playing front.

“A number of experienced Juniors are now on board and most of the team that beat us last time are away to pastures new.”

Slater added: “Gary is a big miss as he has been in outstanding form however we are very fortunate in having Sam Biggart waiting in the wings as a replacement and he will be desperate to impress as he only lost his regular starting place to Gary after picking up an injury.”

The quirk of coincidence pairing the league rivals together in the Cup’s last 16 brought Gartcairn boss Greig to reflect: “The thought did cross my mind when I looked at the fixtures last Sunday that we might come out of the hat together.

“It is what it is and there will be no relevance, psychological or otherwise, attached to how this week’s game pans out.

“My players have to go there looking to win as promotion is out of our own hands after losing seven of our 13 league games and we simply cannot afford one more slip up.

“This is a completely different test as Colin’s team are always well drilled and with a bit of pace about them while Hermes were more physical however I feel we have players who can adjust their game to meet this challenge.

“We’re certainly not running scared of the prospect and everyone is in good spirits and looking forward to the game.”

Offloading wantaway midfielder Chris Dolan to Rossvale to allow him to be reunited with his former Bellshill Athletic manager Brian McGinty makes a total of seven players who have departed the MTC dressing room.

Greig insisted: “ The guys who have left didn’t want to be here for a variety of reasons and I’m more than happy to be going forward with a committed bunch who I can depend upon to give me their all in training and games.

“Academy recruits Luke Tuite and Josh Moore have not looked out of place since coming into the team and are a testament to the good coaching at this club, so I just hope there are others of their ilk in the pipeline .

“But the youngsters are not the only ones helping to raise the bar as Kevin Ross and Colin Marshall served up outstanding displays against Hermes and I now want more of the same in every game starting with Carluke this week.

“That’s not to say we won’t make changes as Lee McShane has been nursed through training this past week and will come into contention for a starting place if he suffers no reaction and declares himself fit when we get to Carluke.”

League leaders Glasgow Perthshire are fancied to bounce back from last weekend’s surprise reverse against Royal Albert when hosting the visit of Vale of Leven and second-placed Port Glasgow head through to Dunipace determined to end a run of three games without a victory.