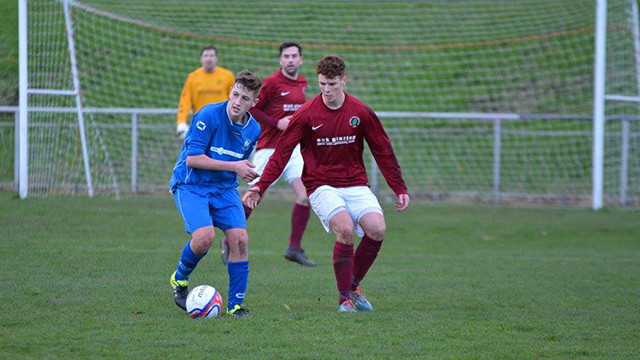 Carluke missed out on a chance to progress in this competition against a team who they more than matched in all departments other than scoring goals.

The early part saw both sides try to get a feel for each other but it was the home side who took the lead in the 11th min when they won a corner on the left, when this was played in to the back post Carluke were found lacking and a low header squirmed its way past Gordon Bruce in the Rovers goal for 1-0.

Carluke looked to reply right away when Craig Stark set Ryan Smillie free on the left with a good pass but Smillie slipped after rounding the keeper and put his effort wide of the post.

A Mark Weir free kick in 24 mins saw the next Rovers chance but despite a deflection off a defender the home keeper saved comfortably.

This effort was closely followed by Lewis Hill and Ian Watt linking to set up Smillie again but his snap shot was again wide of the target.

The visitors were having the better of the match at this point and Chick McCole played an excellent Crossfield ball to Watt but again his effort was just too high to count.

The half ended with North End breaking well down the left but a low drive saw Bruce get a touch on the ball to send it away from goal and Scott Bellew completed the clearance.

The second half had barely got warmed up when Carluke fell further behind to another poorly defended goal when a throw in from the left was flicked on and with Carluke not marking up a simple tap in made it 2-0.

Carluke found chances few and far between and their next effort came in 64 mins when another Weir free kick brought out a good save from the home keeper, this was followed by a really good chance when Watt found space in the Nth End area but after creating space his blasted effort was tipped over the bar.

This miss seemed to knock the stuffing out of Rovers and all they could muster in the way of chances was an effort from Jonny Wilson which skimmed the post on its was past.

The home side ended the match strongest but a combination of good work from Bruce and a wee bit of good fortune meant the score stayed at only 2-0.

This lacklustre performance saw Rovers stumble out of this years competition and they will have to get back to collecting much needed league points this week at home to Renfrew.