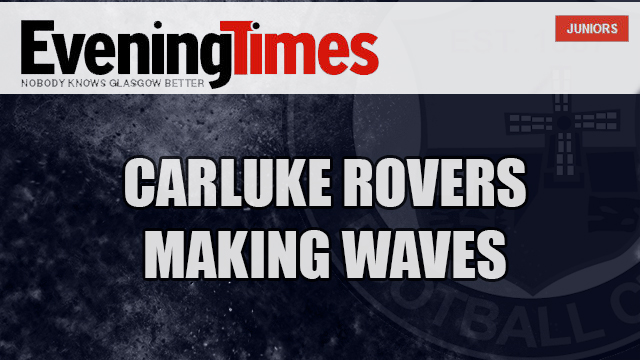 Carluke Rovers latest efforts have been recognised in this weeks Evening Times as part of their juniors section.

Meanwhile, making waves in the Second Division are Carluke Rovers showing signs of a recovery after picking up just one victory in their opening five league outings and looking a good bet to record a fifth win on the trot away to Lanarkshire near neighbours Newmains United tomorrow.

Team boss Colin Slater revealed: “Having key personnel missing for a number of weeks at the start of the season hit us hard and heads were down because of results.

“Things stared to turn round when players became available again to provide competition for the jerseys and we quite honestly haven’t looked back since and are playing some exceptional football.

“Ian Watt and Greg Fernie have formed a terrific striking partnership while Mark Haddow has taken over the captain’s armband since Stevie Murray’s injury and has relished the added responsibility by serving up some great displays.

“But the whole place has received a lift following a heart to heart talk and the attitude and training ground efforts of each and every player has been nothing short of exemplary.

“That’s why we are coming back to the fore and hopefully we can continue on a similar vein at Newmains who are sitting bottom of the table but will be afforded the same respect as if they were top dogs.

“They have a manager in Kevin Muirhead with extensive contacts and you can bet he will be tapping into them to improve his lot.”