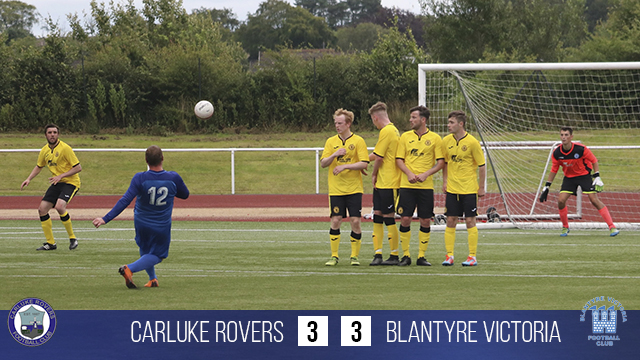 Carluke Rovers played their final warm up game on Saturday against Blantyre Vics who will be playing in the Division above Rovers next season.

This was a final opportunity for Rovers Manager, Derek Wilson to evaluate his squad and look at a couple of trialists before the serious stuff starts on Saturday.

The game was played in benign conditions and it was Blantyre who showed first with a glaring miss in the first minute when a cross from the left was ballooned over the bar by Jake Hughes.

However it was Carluke who were to open the scoring in the 5th minute when a good run from Stuart Mitchell resulted in him being barged over inside the box and the ref had no hesitation in pointing to the spot.

The resultant penalty was taken by Ciaran Lafferty who had no difficulty in sending the Blantyre keeper the wrong way putting the Rovers 1-0 up.

There was opportunities to be had at both ends in the first half but it was Carluke keeper Adam Brown who help keep Carluke’s lead when he made a great save diving to his right from a header following a corner.

At the other end Carluke also came close on a couple of occasions.

On 40 minutes Rovers were forced into a substitution when industrious midfielder Maxime Neossi went off with an injury to be replaced by Dominik Chiedu.

There was no more action in the first half and it closed out with Rovers leading at 1-0.

The second half began with Rovers making several changes to ensure that everyone in the squad was utilised and got valuable game time.

These changes took a little time to bed in and not surprisingly Blantyre started the better pushing Rovers a little deeper with some crisp passing and interplay.

However it was to be Carluke who were to increase their lead in the 53rd minute when a long ball down the right found Cassidy who eluded his marker and got to the byline clipping the ball across goal for and easy tap in for Lafferty in front of goal for his and Carluke’s second.

Blantyre continued to push and Carluke keeper Brown was called into action on 54th minute when he was forced to save with his outstretched foot a shot from Blantyre fullback Jones when through on goal.

In the 67th minute Blantyre were to find the net when a cross to the backpost was met by a powerful header from Hughes to make the score 2-1 and bring Blantyre back into the game.

This goal gave the away team a boost and they pushed hard for the equaliser and they didn’t have long to wait long as in the 70th minute a header by Blantyre’s Millar was well parried by the keeper but unfortunately for Carluke first to pounce on the loose ball was Caldwell who calmly rolled the ball into the empty net to level the scores at 2-2.

The Blantyre equaliser seemed to galvanise Carluke and they began attacking the Blantyre rearguard with crisp passing and powerful running upfront from Cassidy.

In the 73rd minute, Cassidy with his back to goal, turned and fired a great shot from just inside the box which shook the Blantyre bar before being bundled to safety.

Carluke continued to push with new found energy and in the 76th minute Kane was brought down by a Blantyre defender just outside the box.

The resultant free kick was taken by Rovers stalwart Mark Weir who from 25 yards powered a fierce drive into the top right hand corner of the net with the Blantyre keeper rooted to the spot.

Within 3 minutes Carluke created another opportunity when the ball was passed into Cassidy who unleashed another great effort from just outside the box which rattled the Blantyre post and shot across goal with no takers and the keeper beaten all ends up.

With the play now moving from end to end and chances being created by both sides it was a missed tackle down Carluke’s right hand side which allowed Blantyre’s Campbell to drive in on goal.

Although keeper Brown managed to save his initial shot the loose ball found it’s way to Black who coolly slotted it away to make the final score 3-3.

A fair result in a very entertaining game.