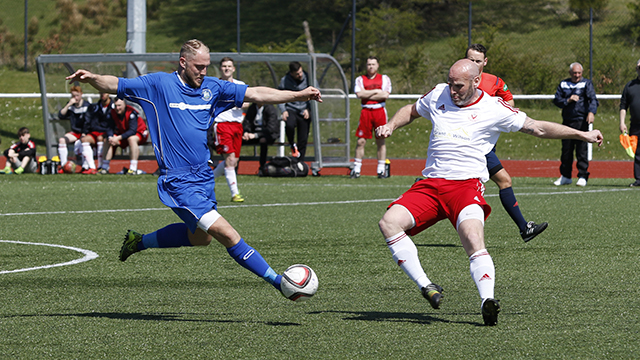 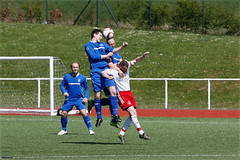 Out with a whimper probably best describes the manner in which Carluke ended their season in a match of vital importance to their status in Division one as they had their destiny in their own hands but failed to take advantage of that situation.

Rovers fashioned an early chance when Ian Watt weaved past a couple of visiting defenders but the end shot was poor and easily dealt with.

The home side did have a chance from a corner in the 3rd minute but Mark Haddow saw his header go over the visitors crossbar.

Carluke were giving way some cheap free kicks around their penalty box, the first couple of these proved to be no problem for their defence but they failed to see the danger and kept conceding.

There was controversy in the 21st min when Vale thought they had taken the lead claiming the ball had come off the stanchion of the home goal but the referee thought it hit the post and allowed play to continue.

The deadlock was broken in the 26th min when Vale of Clyde were awarded another free kick 20 yards out and this was deflected past Gordon Bruce in the home goal for 1-0 to the visitors.

Carluke were finding it hard to create chances but broke on the right in 29 mins through Scott Bellew but his cut back was cleared by the visiting defence. 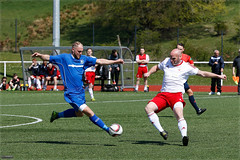 Bruce in the home goal had to look lively to bring off a good save in the 32nd min before Vale eventually doubled their lead a couple of minutes later when a header beat him for 2-0.

Carluke gave themselves a bit of hope for the second half when they scored a fine goal in 43 mins after good work from Lewis McDougall on the right and an excellent cross to the back post for top scorer Watt to head home for 2-1.

As has been the case for big parts of the season the home side did not get started at all in the second half allowing their visitors to control large parts of the play without threatening the home goal. 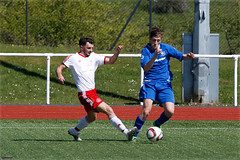 The visitors scored a killer 3rd goal of the match in 62 mins when a throw in from the left was poorly defended by the home defence and was stabbed past Bruce for 3-1.

Carluke huffed and puffed for the remainder of the match but never really posed a threat to the visitors goal.

The final nail in the coffin for Carluke came in the 89th min when Davy Gray gave away a penalty which was struck home for a final score of Carluke Rovers 1 v 4 Vale of Clyde.