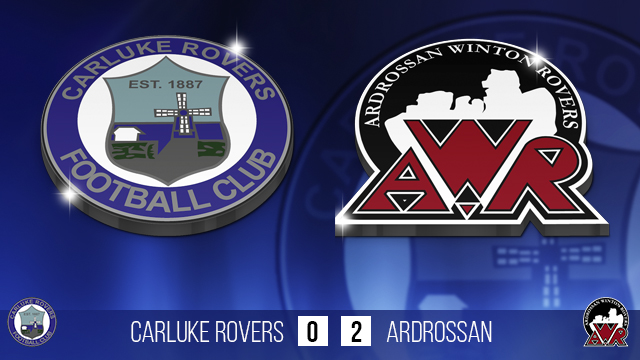 The game kicked off in benign conditions for both teams but it was Carluke who were to create the first chance in the 11th minute. A Jamie Dickson corner was fired into the middle of the box and in the melee the ball appeared to have crossed the line just before it was cleared. The referee thought differently however and did not give the goal.

Carluke were to rue this decision 2 minutes later when keeper Adam Brown pulled down Peter Haggarty as both tried to get to the ball first with Haggarty just winning the race. The referee had no hesitation in pointing to the spot and the penalty was dispatched into the net by Derek Kennedy to make the score 1—0.

Although overall there wasn’t much between the teams this penalty was to be Ardrossan’s only effort on goal in the first half and it was to be Carluke who would create several openings in their search for an equaliser.

The first of these was to come from debutant James Frame who was fed in by Stuart Mitchell. He took the pass and cleverly jinked past 2 Ardrossan defenders before shooting. Lochhead in the Ardrossan goal did well stop the effort by using his feet to clear the danger.

Next to try his luck for Carluke in the 31st minute was Lewis Murdoch who went on a mazy run cutting in from the left across the pitch before firing in a shot that just crept past the keeper’s right hand post.

Two minutes later Mitchell collected the ball on the left for Carluke and put in a great cross to James Frame whose shot was blocked. When the rebound fell to Jonny Wilson his resultant shot was saved by Lochhead in the Ardrossan goal.
A minute later it was James Frame who was to turn provider as he cut inside into the box and squared the ball to Lewis Murdoch but his resultant shot flew well over the bar.

The final chance of the half involved a strong run from central defence by Carluke captain, Mark Cassidy who then fed in Lewis Murdoch for another effort on goal. Although this time, his shot was on target, it was straight at the Ardrossan keeper who coped with it well.

This was the last action of the first half with Ardrossan taking a slender 1-0 lead in at halftime.

The second half was to follow a similar pattern to the last league game against Glasgow Perthshire with limited opportunities at either end. However the difference between the teams was simply that Ardrossan Winton were more clinical than Carluke in front of goal. They scored again with their second attempt in the match when in the 56th minute a corner from the left was met by Kyle Lochhead whose header found the bottom corner with Adam Brown helpless to stop it. This made the score 2-0 and a long way back for Carluke.

This second goal took the wind out of Carluke’s sails and apart from a Frame effort against the post Carluke never looked like they were going to recover anything from the match. Ardrossan also did not create much in the remainder of the match apart from a gilt edged chance that Derek Kennedy put over the bar from 8 yard out in the 82nd minute.

This was another great effort from Carluke Rovers and on this form, as the new players improve their match fitness and understanding with the other players in the team, results will follow.