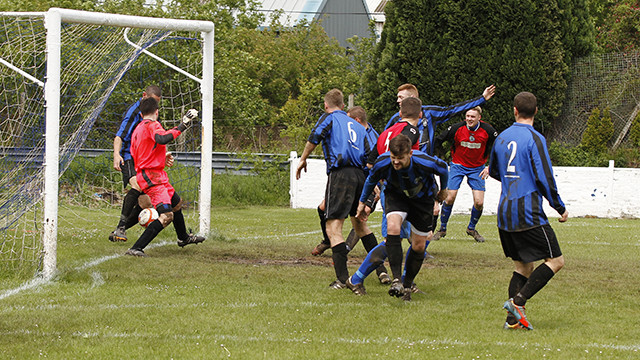 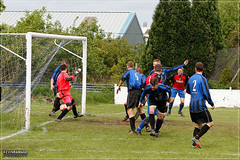 The Rovers final game of the season turned out to be a disappointing end to a strong league campaign.

Their Central League Cup quarter final tie with Blantyre Victoria was a game lost after squandering a handful of great chances.

A blustery wind and driving rain before the kick off threatened to turn the tie into a farce before a ball was kicked and despite playing into the strong wind in the first half the Rovers dominated for long spells.

As early as the seventh minute good control play on the left from Cavanagh ended with a shot over the bar.

A couple of minutes later a superb pass from Haddow put Watt through with only the keeper to beat but the Vics goalie gathered the shot easily.

These chances seemed to rally the new Division 1 champions and Stewart Thomson in the Carluke goal was called on to make several excellent saves to keep the sides level.

As the first half trundled on the heavy Blantyre pitch slowed the pace of the game.

A superb run from Watt was finished with with a defence splitting pass to Wilson who blasted the ball over the bar from just inside the box.

A great chance missed which would prove costly.

On the half hour mark a Rovers free kick outside the Blantyre box was taken by Weir and brought out a fine save from the Vics stopper.

A scramble in the 6 yard box from the resultant corner saw the ball only just cleared off the Vics line. 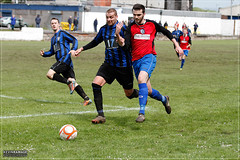 As the first half drew to a goalless close the Blantyre Manager Greig was sent to the stands after an altercation with the referee.

Blantyre raised their game to press the Rovers defence but strong performances by the back three kept them at bay.

After half time with the wind behind them there was a reasonable expectation that the Rovers would build on their first half display to find a winning goal.

However it was the Vics who started strongest and within a couple of minutes of the kick off captain Murray was called on to clear the ball from the Rovers goal line.

Blantyre continued to press and on 55 minutes the excellent Thomson in the Carluke goal pulled off a fine save at his right hand post. 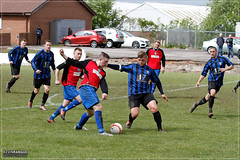 When the first goal of the game was scored on 69 minutes it was against the run of play.

Carluke continued to press for an equaliser and Dickson almost succeeded on 75 minutes when a shot from the right side of the Blantyre box slipped past the left hand post.

Two minutes later a magnificent shot from the influential Weir was pushed onto the bar by the Vics goalkeeper.

Almost immediately Blantyre broke up the park and brought out a fine save from Thomson.

On 80 minutes the game and the Rovers season was over when Blantyre scored.

Overall Carluke should have won this game.
There were no poor performances on the park and some excellent ones.
Amongst them Players Player of the Year Watt, defenders Lithgow and Gow, Haddow and Wilson in the middle of the park, and goalkeeper Thomson all deserve praise for their performances.

Blantyre move on to play their Central League Cup semi final tie against Yoker, and before that an Evening Times cup tie against Ardrossan

Carluke players now have a relatively short close season break before pre season training which is likely to be in 4 weeks time.