Carluke Rovers travelled through to a blustery Glasgow Perthshire for this West Of Scotland First Division Leauge game. Rovers were looking to get back on track after a disappointing loss the previous week at home. This was only Glasgow Perthshire’s second league game with their previous two fixture being abandoned and postponed due to a waterlogged pitch.

Carluke won the toss and decided to play into the wind in the first half looking to benefit from any advantage the elements would provide in the second. However it was Carluke who struck first in the second minute with their first foray into the Perthshire box. Ross MacNeill made a good run down the right hand side and crossed the ball into Ciaran Lafferty who turned and let fly. His effort hit the post but fortunately for Carluke rebounded to Paul Donaghy who fired it back toward goal and over the line to make the score 1-0 to Carluke.

However this lead wasn’t to last long as in the 6th minute good play down the right by Perthshire resulted in a shot being saved by the feet of Dan Terry in the Carluke goal but the rebound went straight to Connor Park who placed a well struck shot out of the reach of Terry to make the score 1-1.

This goal spurred Perthshire on and with the wind at their back they began to put pressure on the Rovers rearguard. Their first effort since the equaliser was when Craig Smith rounded Dan Terry in the Carluke goal but the resultant angle was too tight and gave James McAllister the opportunity to get back and clear his lines limiting the damage to a Perthshire corner. This was then followed by a shot from distance by Paul Harrison but it was straight at Terry in the Carluke goal who dealt with it easily.

At this stage, midway through the first half, Perthshire had control of the midfield with No 10 Ryan Gemmell being particularly impressive with some strong running and incisive passing forcing the under pressure Carluke midfield back.

here was a brief respite for Carluke when the ball was squared to Conor McDonald who turned with his back to goal and fired off a good effort which narrowly went past the Perthshire left hand post. However this was to be a temporary relief for Carluke as in the 21st minute a defence splitting pass was gathered in by Craig Smith who beat the Carluke offside trap to run through unchallenged on goal and calmly sidefooted the ball past Terry to make the score 2-1 Glasgow Perthshire.

Carluke were not to be denied however and in the 32nd minute a long throw special from Dom Chiedu was knocked on by the head of Donaghy to find the feet of Lafferty in the six yard box who had all the time in the world to knock the ball into the empty net making the score 2-2.

This scoreline flattered Carluke as the first half performance had been abject compared to how they can perform but just as they thought they were back in the game an unfortunate error by keeper Terry gift wrapped the half time lead to Glasgow Perthshire. A simple kickout by Stark in the Perthshire goal was carried by the wind and bounced just outside the Carluke box and rather than commit to collecting the ball Terry allowed Ryan Gemmell to nip in and header the ball, almost out of his hands, into the empty net for 3-2 Perthshire.

The keeper however made a good save in the 46th minute from a shot from 16 yards out but was clearly disappointed with the loss of that third goal. However it was no more than Perthshire’s play deserved in a first half where they were the better team. Half Time 3-2.

Carluke started the second half hoping that they could harness the wind to their advantage in a similar fashion to Perthshire in the first half. However it took a good 15 minutes before either side created a meaningful chance and indeed it was another Chiedu long throw into the box that found Lafferty again but his shot from close range cannoned off the foot of the post and was cleared to safety. Five minutes later Carluke made their first substitution with McDonald coming off to be replaced by the returning Stephen Larkin on the left wing.

It was only to take 5 minutes for Larkin to have an impact on the game as he knocked a diagonal pass through to Donaghy and the Carluke striker clashed with the Perthshire Keeper with the ball rolling to safety and the Keeper needing some attention. 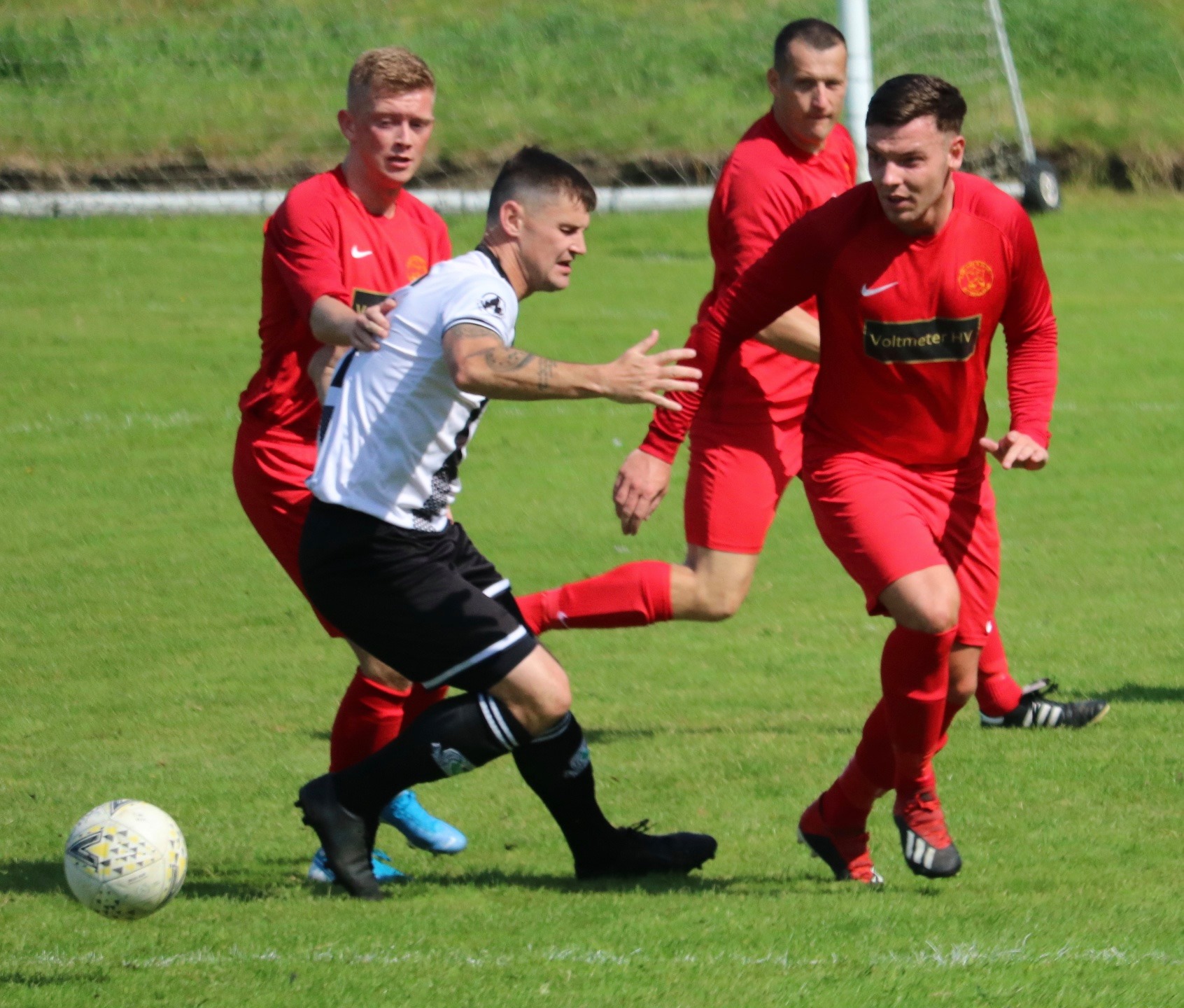 At this stage and with 20 minutes remaining Carluke started to believe they could get something out of the game, as on top of their better play Perthshire had started to lose their discipline with some rash challenges and verbal exchanges with the travelling Rovers support. It was no surprise when in the 77th minute a long kickout was headed on by Donaghy to Lafferty who managed to shrug off his marker and fire a crisp left foot shot across the keeper and into the bottom left corner. 3-3.

This goal was quickly followed by a Perthshire sending off for a second bookable offence and with 13 minutes still to play Carluke scented victory and indeed their next goal and the ultimate winner was only 3 minutes away. In the 80th minute Carluke midfielder Neossi was pulled down 22 yards out and a direct free kick was awarded. Up stepped free kick specialist Mark Weir who drove an arrow like shot into the top left hand corner to give Carluke the lead for the first time in the match. 3-4.

With only minutes remaining Glasgow Perthshire threw everything forward in an attempt to get an equaliser but without really worrying the Carluke defence. In fact it was Weir again who almost extended Carluke’s lead with a thunderous volley from 20 yards that was brilliantly saved by Stark in the Perthshire goal pushing the ball over his bar.

Although Perthshire continued to press for the last few minutes this was to be the last decisive action of the match and in a game of two halves Carluke were fortunate to come out with all three points and now sit handily placed second in the league. Final Score 3-4.