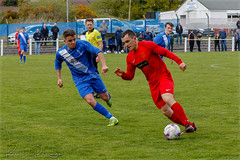 Carluke travelled to Muirkirk in their penultimate game of the season knowing that only a win would keep their hopes of promotion on track.

The management team were dealt a few blows prior to the match with Mark Weir being ruled out through illness and several other players unavailable.

Carluke kicked off the match and took the early initiative pressing hard against the Muirkirk defence.

It took 7 minutes for the first real chance of the match as Chiedu came onto a ball in a packed penalty area but his shot went wide.

The Rovers were playing some decent football and creating chances and on 11 mins Sam Biggart cut on from the left and was unlucky to see his shot flash across the Murkirk goal with the goalkeeper scrambling.

Muirkirk threatened a few times but the Carluke defence stood strong with Chiedu clearing everything that came at him.

Carluke finally opened the scoring on 21 mins as Lafferty met a ball into the box ahead of the keep and slipped it past the Muirkirk keeper.

It only took 2 minutes and Lafferty scored his second with a deft lob over the Murkirk keeper.

Biggart and Mitchell were causing chaos down the left and on 30 mins Biggart broke into the box only to be felled by the Muirkirk number 18, the referee has no hesitation in pointing to the spot.

A 3rd goal would put Carluke in a comfortable position but a great save from Laffertys spot kick kept the scoreline at 2-0.

Biggart again threatened with a powerful goalward header but again a fantastic save by Muirkirk keeper kept the ball out. 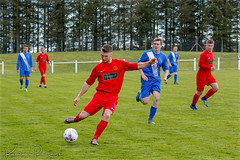 Before half time Muirkirk had their keeper to thank again as a Kane header looked goalbound but again was well saved.

Almost on half-time Muirkirk came close to scoring but for an excellent save from young Brown in Carlukes goal as he dropped to his left and pushed a goal bound shout round his post.

Muirkirk came out in the second half and immediately took the game to Carluke breaking forward several times but not really creating any real chances.

On 48 minutes Chiedu came close after a great cross into the box see him send a looping header just over the bar.

A corner for Carluke in the 58th minute seen Lafferty get his hat trick as a fine corner in from Biggart was met powerfully by Lafferty at the back post and his header proved unstoppable.

The Rovers continued to push forward with Kane threatening on the right on several occasions.

With Vale of Clyde starting the day 4 goals ahead of Carluke in the league it was important for Carluke to keep pushing and try to pull in the goal difference, not realising at that point just how important it would become. 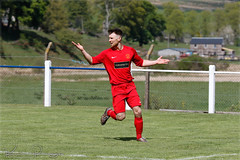 Muirkirk came close on 67 when a great initial save from Brown was parried back out and fell at the Muirkirk strikers feet but his shot cannoned of the bar to safety.

Carluke hit their 4th on 75 mins as a fantastic though ball was met again by Lafferty who slipped it past the Muirkirk keeper.

With Vale of Clyde scoring a last minute winner at Lanark, taking them onto 50 points, 3 points ahead of the Rovers and with both teams on the same goal difference it makes Carluke’s task in next weeks game against Annbank ever so simple.

Win the match and its promotion, anything less and its West Region 2 next season.