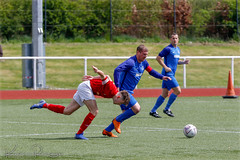 Carluke started this game knowing that their chance of promotion was wholly within their control.

By the close of play that opportunity was gone and they must now hope that others can secure results elsewhere which will help secure Carluke’s promotion.

Despite goals from Lafferty and Donaghy for the home team it was goals for the visitors, in the opening 5 minutes, and the final 10 minutes, which ultimately set the tone of this tie.

Carluke started brightly enough however some nervous defending led to Johnstone’s Davies opening the scoring in the 4th minute.

Carluke responded well to this early setback and pressed the visitors hard for an equaliser. On the 10 minute mark they got the breakthrough.

A trademark long throw in from Chiedu on the left was headed on to the back post where Lafferty controlled the ball well and gave himself the easiest of chances to strike the ball past the visiting keeper and level the scoring. 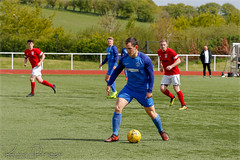 Carluke’s promotion chances were back on track when, in the 36th minute, the industrious Donaghy fired them into the lead.

Five minutes later a fine save from Brown in the Carluke goal kept the home team in front.

Despite their lead the Rovers started the second half nervously and it was the visitors who controlled the game and looked more like scoring.

They should have levelled the scoring on 52 minutes when a Johnstone corner on the right found an unmarked McGrory in the 6 yard box in front of an open goal.

Fortunately his header sailed harmlessly over the bar.

A minute later what looked like a clear foul in the Rover’s box by McAllister on Davies could have been a penalty but, once again, the Rovers good fortune seemed to be working when the referee waved play on.

The visitors continued to press for the equaliser and Brown in the Carluke goal was the busier of the keepers.

However with 15 minutes left Matthews, the Burgh stopper, needed to pull off an excellent save to keep his team in the game.

A cross from the right by Chiedu found Biggart who laid the ball off to Weir 20 yards out.

He unleashed a trademark left foot strike which looked goal bound only to be stopped by Matthews. 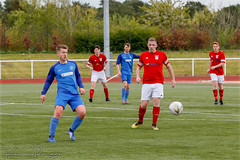 The home sides good fortune finally ran out in the 83rd minute when a hopeful ball was played into the packed Carluke box from the left.

Brown saved an initial shot however Johnstone’s Herron swooped onto the rebound to level the scores.

Carluke now travel to Muirkirk next week week for their penultimate game of the season.

A win is essential to keep their promotion hopes alive, but the result of the game at Moor Park will also have a significant bearing.