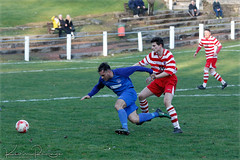 Coming off of a 6-2 victory the week before against Irvine Victoria the Rovers would have hoped to have carried that performance into this clash against League leaders Lesmahagow Juniors.

Playing up the Craighead Park slope it was Lesmahagow who took control of the match with the Rovers struggling to get into the game.

It only took around 9 minutes for the Lesmahagow pressure to pay off as some poor Rovers defending seen the ball break to the Lesmahagow number 11 who took his opportunity to fire the ball home.

Although Rovers pushed forward and created several 1/2 chances it was the Gow number 11 who doubled their lead in 17 minutes, through a crowded penalty box he unleashed an unstoppable shot from the edge of the box into the top left hand corner of the net. 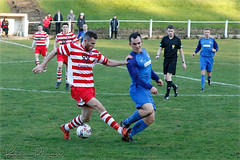 Carluke now had a mountain to climb if they were to take anything from this match.

That mountain became insurmountable before half time as young Ross McNeil having been the target of some tough defending by the Gow saw red as the referee inexplicably sent him off for something that was said to the Lesmahagow keeper.

At half-time Wilson took his team into the changing room 3 goals behind and 1 man down. 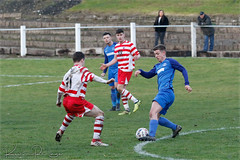 The second half was certainly an improvement by Carluke and although Weir had several free kicks from good positions outside the box, they could not be converted.

It was pretty much end to end stuff with both teams creating several chances but the first half seen all the goals this game would see.

It’s on to Scottish Cup action next weekend where the Rovers face tough opposition in Lochee United.