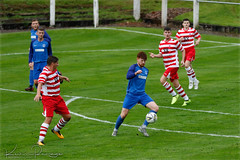 After Monday nights home defeat against Lanark Utd the Rovers travelled to face The Gow in their last sectional league cup match .

Carluke opened the scoring after 2 minutes when veteran midfielder Mark Weir set Peter Byrne on a run down the left wing who in turn found an on rushing John Tamburinni on the edge of the Gow box who took a heavy touch as he sprinted in on goal.

The home keeper sprinted off his line and was adjudged to have fouled the Carluke forward who had clipped the ball over the onrushing keeper before the ball was cleared off the line.

The resultant penalty was neatly dispatched by Weir.

The home side equalised three minutes later with their first attack of the game when a long clearance kick from their penalty box found their left winger who’s first time cross found the feet of their centre forward who slotted the ball home from 5 yards. 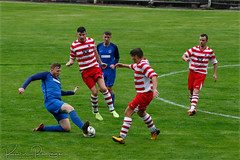 Weir drove the Rovers forward creating several shooting chances for Cassidy, Byrne, Tamburinni and Haley all having a pot shots at goal from the edge of the opposition box to no avail.

Unfortunately and completely against the run of play Rovers found themselves a goal behind on 12 minutes when Lowdon gave the ball away from a throw in and a deep cross from the left found the unmarked Gow striker at the back post who simply headed the ball into a half empty net.

As Rovers laid siege on the home sides goal it looked only a matter of time till they drew level as they outpassed and out manouvered the home side.

Carluke again went on the offensive winning a corner on the right, Sam Biggart cleverly found Weir on the edge of the box who’s snapshot flew inches over the bar.

This was The last action Weir saw and was substituted for Sean McKenna after 25 minutes after injuring his right hamstring.

On the half hour the home side were gifted a 3rd goal when a haplessly misplaced pass by Lowdon allowed the Gow centre forward to score with an easy chance.

Rovers began the second half in spirited fashion and on 55 minutes Tamburinni outpaced the left back and played an inch perfect pass into the path of Peter Byrne who fired in a fierce shot straight at the keeper from 10 yards. 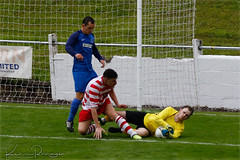 Rovers continually pushed forward with sustained attacks and on 60 minutes a goal bound Eddie Haley shot was charged down inside the box as the home team defended in numbers.

Two minutes later Mark Cassidy broke from midfield and charged into the box where his heels were clipped as he was about to pull the trigger.

The Ref should have awarded a penalty but bizarrely awarded the Rovers a corner as the ball ran out of play.

The resultant corner from the left was played short to McKenna at the edge of the box who’s cross was headed inches over the bar by Shaun Watson.

The home side completed their ‘rout’ on 80 minutes when a swift counter attack and cross from the left wing left the Rovers keeper rooted to his goal line as the ball was side footed into the net from 5 yards.

Rovers need to quickly resolve their defensive deficiencies before they open their league campaign on Saturday at home to Ashfield Juniors.