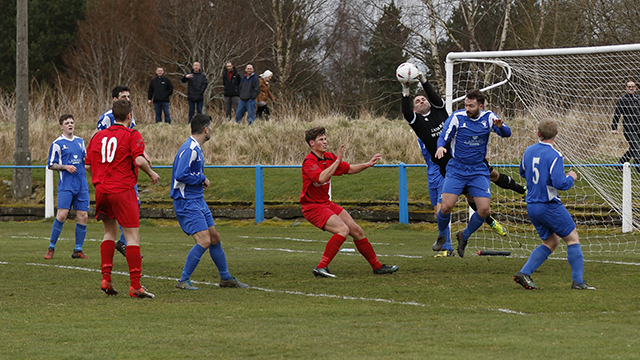 Lewis McDougall slides in on the Lanark goalkeeper.

Another Saturday brought another at best mediocre performance from Rovers who slipped to their third defeat in a row at near neighbours Lanark Utd.

Carluke started the match very slowly and could have gone a goal down in 2 mins when Lanark cut in field but their final shot was deflected away for a corner before a mix up in defence saw Gordon Bruce allow the opposition possession on the right but a low ball across goal found no takers.

Rovers were limited to a couple of long range efforts from Ian Watt that caused the home defence little problems before the deadlock was broken in the 14th min when the ball was fed out to the Lanark left and a low shot gave Bruce no chance to make it 1-0. 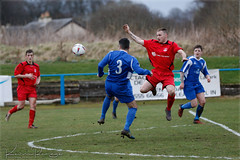 Lewis McDougall slides in on the Lanark goalkeeper.

Watt again tried to get the visitors in to the match but a shot from distance in the 16th min went over the home bar.

The score was doubled for Lanark in the 22nd minute when a loose ball in front of the Rovers goal was somehow scrambled over the line for 2-0 a score they held on to until half time despite a long range Chick McCole effort and good work from Alberto Vezza producing a chance for Lewis McDougall.

Despite a slow start to the second half the visiting Rovers eventually got in to the match with first McDougall then Watt bringing out fine saves from the home keeper with net bound efforts.

Ian Watt rises well in the middle of the field.

Carluke reduced the deficit in the 70th min when Watt was upended 25 yards out and Mark Weir struck a fine left foot free kick low in to the net for 2-1.

Rovers pressed to try to get the equaliser with the last part of the match showing their best possession but again the home keeper kept them out firstly tipping a Weir free kick round the post then turning away a good looping header from McDougall.
Rovers team