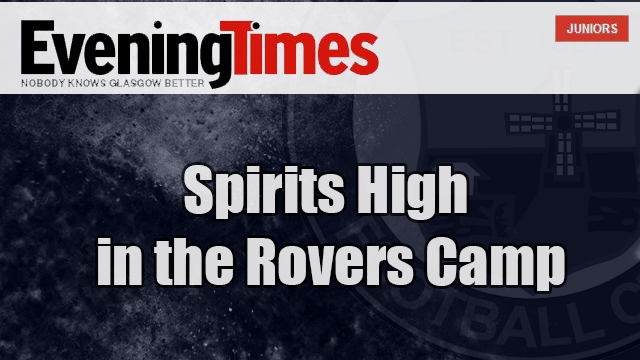 Spirits High in the Rovers Camp

In the build up to todays Scottish Cup tie, Carluke Rovers have featured again in the Evening Times as part of their juniors section.

Meanwhile, hoping to prove themselves the scourge of the Ayrshire town of Irvine are Carluke Rovers who await the visit to the John Cummings Stadium of Irvine Meadow after eliminating Irvine Vics in the last round.

Rovers boss Colin Slater accepts his side have a much bigger hurdle to negotiate in going up against the Medda however he is not running scared of the prospect and feels confident his players will give a good account of themselves.

He said: “The spirits are high in our camp as you might expect on the back of a five-game unbeaten run and the players will relish having a break from the norm to play in the cup.

“I took in Irvine Meadow’s game against Cumbernauld last week and they are a decent side with quality players in big centre-back Ryan Begley, the former Pollok full-back Mark McLennan and Gordon Boyd up front, however they are not unbeatable and that’s the message I’ve been preaching to our players this past week.

“Our two front men Ian Watt and Craig Fernie have shown they know where the goal is and will pose a danger and it’s encouraging that we also have last season’s Medda goalkeeper Danile Tobin as our last man standing at the other end of the pitch.

“We are not going to be making a raft of changes with the guys in such good form but the temptation is there to recall our most experienced player Mark Haddow who returned to training after a long injury absence this week and you can take it we’ll be wrapping him in cotton wool to see if he can declare himself fit for Saturday.

“The Scottish has been full of surprise results this season and I see no reason not to think there will be a few more tomorrow.”