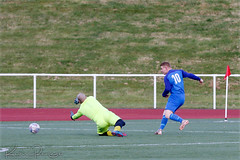 Carluke Rovers welcomed Royal Albert in the first round of the West of Scotland Cup. Both teams play in the West Region Division 1 and a tight match was expected based on their league meeting which Royal Albert narrowly won 3-2.

From a Royal Albert perspective they had three players coming back from injury and a debutant keeper in the vastly experienced Davie McEwan. Also back for his first game in a year and a half was Davie Hamilton who wore the number 6 shirt.

The game started with Carluke taking the fight to Royal Albert and in 9 minutes a long ball by Craig Grierson caught out the Albert defence to find Paul Donaghy who calmly rounded the Keeper and slotted the ball home from a tight angle to give Carluke an early lead.1-0.

Nine minutes later after another good move the ball was fed into Shaun McKenna who in turn found Stephen Larkin. The midfielder turned one way then the other and got a good shot in which the Albert keeper did well to save down to his left hand post.

Carluke continued to push forward and Paul Donaghy was finding himself in some good positions but just lacking the final end product. In the 21st minute he beat the offside trap and with the Keeper off his line tried to lob him but skewed the shot wide of the left hand post.

It was the same player again whose good running found him in behind the Royal Albert defence but his shot from 15 yards out was straight at Keeper McEwan. 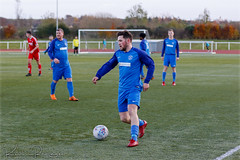 Carluke were the better team in this first half but it wasn’t all one way traffic. In the 28th minute an Albert freekick from outside the box found the head of Michael Archer who from the penalty spot could only header weakly straight into the arms of McAllister.

It was McAllister who was to come to Carluke’s rescue again in the 32nd minute when the Albert fullback Ryan Sullivan was bearing down on the Carluke goal. His shot from close range was blocked by the Carluke keeper to keep the lead intact.

Although there was the occasional scare by Royal Albert it was Carluke still controlling most of the possession and it was Donaghy again who got his head onto a bouncing ball only to see it flash just wide. This was quickly followed by a volley from Ross McNeil which was to go just over the bar. This was the last action of the half and the sides went in with Carluke Rovers leading 1-0.

For all Carluke were the better team in the first half Royal Albert came out with a renewed vigour as they probably felt they had escaped in the first half and were relieved to be still in the game. That said the first opportunity in the second half was to fall to The Rovers when Ross McNeil got to the byeline and cut a nice ball to Shaun McKenna who shot just wide of the post.

This spurred Royal Abert into action and it only took them a further minute to carve out their first chance of the second half. Declan MacAulay cut the ball back to Michael Neill whose shot rattled off the Carluke post before being cleared to safety.

Next up for Royal Albert was a great effort again by MacAulay whose shot looked to be going in but for a wonderful finger tip touch over the bar from McAllister in the Carluke goal. At this stage of the game it was Royal Albert who were creating the better chances and in the 53rd minute they got their equaliser.

Ross Mac Neil was unfortunate to handle the ball inside the box
and the resultant penalty was coolly dispatched by David Hamilton to level the score at 1-1. 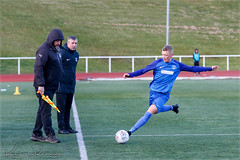 After their equaliser Royal Albert continued to push forward and a great run by Robbie Bryden into the Carluke box was only thwarted by a timely tackle by Mark Weir as the Albert defender was about to pull the trigger.

Again on the hour mark Michael Neill forced McAllister in the Carluke goal to pull off another great save down to his left after the Rovers defence had lost possession in the centre of the park.

It wasn’t all one way traffic however in this half as Carluke were also creating chances. In fact the best opportunity of the game fell to Carluke when there was a bit of a stramash in the Royal Albert six yard box when firstly Paul Donaghy had his shot blocked. The ball broke to Dominic McMeekin but his blast from 3 yards out hit off the head of the unsuspecting former Carluke player John Renwick who was on his knees at the time on the Royal Albert goal line with the ball cannoning to safety.

Other than a shot from substitute Jamie Dickson in 89th minute which was straightforward for the Davie McEwan in the Albert goal neither Keeper was to be troubled for the remainder of the game and the final result was 1-1. With this being a cup game to penalties we would go to settle the matter.

Carluke on the other hand need to dust themselves down and prepare for next week’s important league game against Maryhill in Glasgow. A victory will be much sought after to halt a recent run of poor results.