Carluke Rovers hosted Kello Rovers in this West of Scotland League One game hoping to keep their one hundred percent league record intact and hold their position at the top of the Division.

Both teams were under strength with Carluke missing four of their regular starters but the players coming in were also of good quality and so an expectant home support were still confident that Carluke could get a positive result.

With the game underway the first meaningful piece if action came in the Carluke box when a cross ball was not cleared and a couple of Kello efforts on goal were blocked by some last ditch tackling before the ball was finally cleared.

Carluke’s first attempt came in the 7th minute when Loudon competed for a bouncing ball with the Kello centre half and managed to get the better of the much taller defender in the air but was stretching when his resultant volley sailed over the Kello bar.

In the 9th minute Carluke’s right back Conor McDonald put in a good tackle in the box to win the ball but was then caught in possession by Kello No 9 whose resultant shot was well saved by Carluke keeper, Dan Terry.

Carluke then went up the park 2 minutes later and the ever industrious Loudon got to the byeline and cut back a good cross to Mark Weir whose touch took the ball away from goal slightly forcing him to turn back and play the ball out wide to McDonald whose low fired in cross was smothered by the Kello keeper.

Kello Rovers were starting to see more of the ball at this stage as the Rovers midfield fell further back leaving a sizeable gap between them and their forwards. This was first to be exploited when in the 14th minute Kello’s No 11 ran down the left wing and put in a great cross which was met by the No 10 who calmly side footed the ball into the roof of the net. 1-0 Kello.

Kello continued to look the better team at this stage but Carluke were always dangerous with Loudon and Lafferty continuing to try and find space making good runs off the ball. The Kello defence however worked well with no shortage of pace themselves and managed to contain the threat. 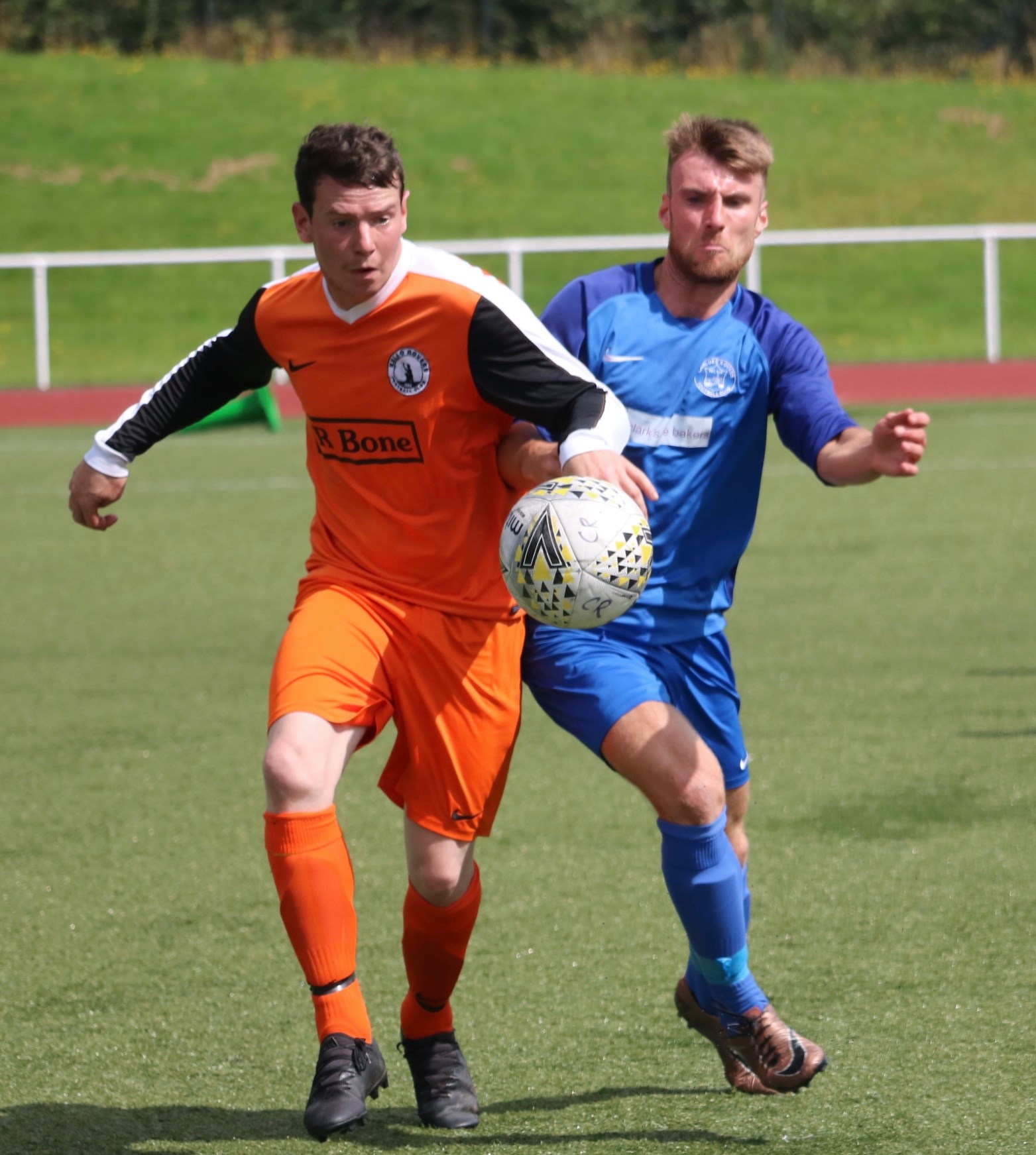 It was however Kello who were to breach the Carluke defence again from the penalty spot. A corner was taken on the right hand side and when the ball came into the box Carluke failed to clear the danger. The ball was struck towards goal from six yards out only to be handled on the line by Carluke’s Stuart Mitchell. The referee had no option but to send him off even although it did look like ball to hand rather than a deliberate action on Mitchell’s part. The resultant penalty was successfully dispatched by Kello number 8 making the score 2-0. A double blow for Carluke who were also now down to 10 men.

2-0 up and with Carluke down to 10 men Kello started to gain further confidence and moved the ball well making full use of the extra man advantage. Carluke continued to work hard to contain Kello and in their urgency to try and get back into the game a couple of late challenges by Chiedu and McDonald saw both players booked.

Carluke knew that if they could score a goal there was a real possibility they could get something out of the game and in the 38th minute a good run and low cross by midfielder Neossi was smothered by the Kello keeper. This was quickly followed by a free header from McDonald following a corner. Unfortunately, it hit against a Kello defender when heading goalward and was subsequently cleared.

Kello also continued to search for a third goal which would have effectively ended the contest and only a brilliant one handed save by Carluke’s keeper Terry down to his right from Kello 10 kept the score at 2-0. It was the same player, a minute later, who from another corner, thought his effort was net bound only for a lunging interception from Chiedu to deflect the ball over his own bar.

This was to be the last action of the first half and gave Carluke an opportunity to regroup and approach the second half in the knowledge they were still in this game. Half Time 2-0

The second half started as the first finished with Kello on the attack and in the 47th minute a great cross to the back post was just out of reach from Kello No 14 whose outstretched foot could only direct the ball harmlessly out of play.

However Carluke were starting to play with a bit more freedom and in truth it was easily forgotten that they were down to ten men. They were starting to get more time on the ball and in the 51st minute great interplay between Lafferty and Neossi on the edge of the box resulted in the ball being threaded through to Loudon whose shot come cross to the backpost was agonisingly missed by Conor McDonald sliding in.

It was only to be 9 minutes later when Carluke got the lifeline their start to the second half deserved. A long ball down the right by fullback Chiedu was picked up by Murray Loudon who sprinted down the wing and cut in a great low cross to the feet of Ciaran Lafferty who had the easiest of tasks to direct the ball into the empty net. 2-1 to Kello.

Kello who had lost their first two league games now looked a little nervous and Carluke continued to press for an equaliser but the Kello defence was playing well and kept them at bay. Carluke were struck a further blow when striker Loudon went off injured with a recurrence of a hamstring injury which has blighted him for some time now.

This did blunt Carluke’s attacking intent and indeed it was Kello who had the two best chances as the game drew to a conclusion. First in 80 minutes a freekick from 25 yards out was well saved down to his right by Carluke keeper Terry and this was quickly followed when the normally controlled Drew Lindsay was dispossessed on his own penalty spot and the resultant effort went agonisingly past the far post.

This was to be the last serious action of the game and the last 10 minutes petered out much to the relief of a tired Kello team who in retrospect just edged it. Final Score Carluke Rovers 1 Kello Rovers 2.