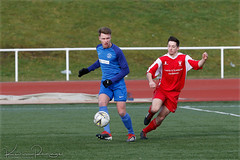 Lanark started the brighter side and almost scored inside the first minute when Hill slipped a neat through ball to Watt on the front edge of the box but keeper Cherrie was equal to the effort smothering the ball at the strikers feet.

After fifteen minutes Rovers Cassidy cleared a Haddow header off the line following a corner and two minutes later Cassidy had a headed effort of his own saved by Halford. 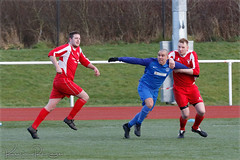 Both teams worked hard to poke and prod for an opening goal and on 25 minutes Rovers Pettigrew managed to jink his way past two defenders down the right flank and fire a low cross across the six yard line with Rovers strikers behind the play.

Veteran Mark Weir had to be replaced after pulling his groin in the 35th minute by Sean McKenna.

The first half huffed and puffed to a close with neither team having displayed any real attacking flair which had been so evident in recent weeks. 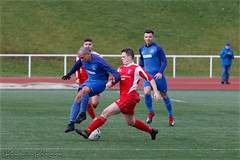 With the second half five minutes old Lanark opened the scoring from a corner which was flick headed into the net at the near post by Watt.

Rovers best effort came after 70 minutes when Pettigrew and Larkin combined on the right edge of the box with Larkin unleashing a fierce shot from 12 yards which was punched clear by Halford.

With the game getting bogged down in midfield Rovers brought on Haley and Kane for Pettigrew and Larkin and looked get in behind Lanark from the wide areas and despite a series of corners Rovers looked ineffectual.

In the closing ten minutes Rovers pressed hard but couldn’t find a way through over or round the Lanark defence.