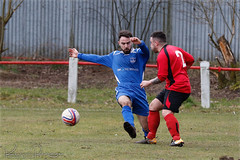 A pugilistic pulsating pendulum of a cup tie is the most apt description of Carluke Rovers central league 2nd round match against Thorniewood Utd with both sides having a real go at each other from kick off to final whistle.

Rovers almost scored after 10 seconds when Mark Weir played in Sean McKenna only for him to sclaff his shot as he burst into the box.

Rovers continued to probe and push for the opener but couldn’t find a way through round or behind the home sides resolute defence.

After 20 minutes the home side sparked into life and on 22 minutes Rovers keeper Liam Grant pulled off 2 magnificent saves firstly finger tipping a 22 yard shot onto the left post then diving full stretch in the opposite direction to push the rebound shot round the right hand side post.

On the half hour Rovers Cathal Tracey picked up the ball from just outside his own penalty area and ran 70 yards unopposed before being chopped down on the edge of home sides box.

The resultant free kick was fired high and wide by Weir who immediately held his hamstring and was subbed for Graeme Martin who was only on the pitch for a matter of seconds before he hit the post from an acute angle.

Martin again came close in the 40th minute when Watt jinked into the box and played the ball into his path only for him to lose his footing before pulling the trigger.

On the stroke of half time Rovers Keeper Grant turned a goal bound shot round the post to ensure a 0-0 score line at the interval. 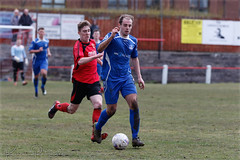 The second half began in similar fashion as the first with Rovers Martin creating chances down the left flank and on 50 mins outpaced his marker and floated in a cross to the back post only for Reece Lowdon to miss an open goal from 5 yards.

On the hour Tamburinni replaced Tracey on the right wing immediately winning a corner from which the home side counter attacked winning a gift of a corner at the other end of the pitch when Biggart headed the ball out with no-one near him.

The resultant inswinger was headed in at the back post for the home side to take the lead and went 2-nil up a minute later as Rovers defence backed off to allow a 25 yard shot to cannon into the net.

Carluke then laid seige to the home sides goal and on 80 minutes Watt played in Lowdon on the edge of the 6yard box only for him to fire his attempt over the bar with an open goal at his mercy.

This was followed by Graeme Martin again outpacing his marker and float in a cross to the back post where it was met by the head of Tamburinni who glanced the ball across goal and into the net. 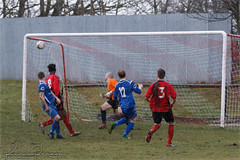 Rovers were then denied the first of 3 penalty claims when Martin crossed from the left for Watt on the penalty spot only to see him pushed to the ground as he headed the ball millimetres over the bar.

With hails of derision booming around the ground the referee was heard to say ‘I think I got my angles wrong’.

One minute later Watt had the ball at his feet inside the 18 yard box with his back to goal when he was sneakily pulled to the ground , despite Rovers claims the Ref ‘didn’t see it’ being only 5 metres away.

With three minutes remaining another Martin cross from the left was handled in the box , another incident unseen by the referee who was 3 metres away.

Rovers continued to press for the equaliser with a Sean McKenna shot drifting inches wide with the last kick of the game.